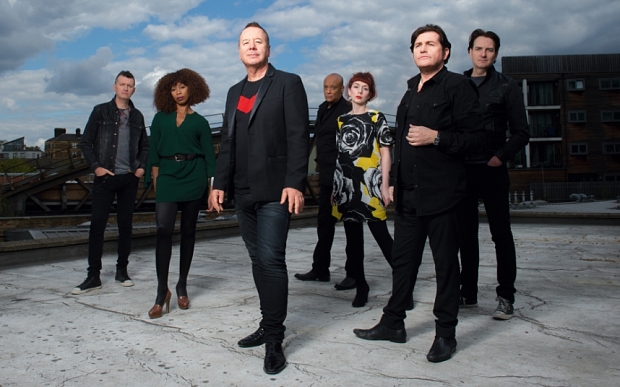 Thirty five years is a long career in any aspect of the music industry, especially as a performer. For Glasgow’s Simple Minds, today’s record business is barely recognisable from the new wave scene that spawned them during the late-seventies. Yet, late last year, the band released “Big Music”, an album critics dubbed a career highlight. XYZ Magazine’s Jimmy Volts caught up with frontman Jim Kerr during their European tour  to discover what keeps them driving onward.
“Big Music” sees Simple Minds return to the elevated status of their glory days back in the eighties. As the title suggests, this new material is of a grand design, crammed with hooks, synthesisers, big beats and stadium- sized choruses. Jim explains the sense of cohesion they’ve experienced since its releasee:
“It seems to be the record that people have been waiting for from Simple Minds for a long time. It’s a new-sounding record that somehow harks back to the past. We all thought the quality of the songs was really great, but your number needs to be up. The winds need to be with you and in this case it seems to be the right record at the  right time.”
The resurgence of the eighties era (in both fashion and music) has led to many of today’s young bands emulating the very sound Kerr and co. helped invent. Yet despite their borderline veteran status (compared to the average age of today’s newer artists), demand is still high for Simple Minds’ iconic sound. Their spring tour is of monumental proportions, taking them across the continent and the UK. So how do they stay sane on the road?
“Good question. Touring is like being in a tunnel. That’s not to say it’s dark or claustrophobic. You just shut out the rest of your life for a month or so and focus on making it sound as good as possible. The sanity comes at the end of each show when you look across the crowd and people just look ecstatic. You sort of bask in that feeling for about ten minutes before realising you’ve got to do it all again tomorrow. We’re on stage playing what (at least to some people) has been the soundtrack to their lives. It’s important. And when you strive to give your very best night after night, that keeps you on the right line.”
Jim’s voice exudes the kind of old-time rock & roll wisdom that can only be gained from a career of ups and downs. Having been there, done that and bought the ridiculously priced tee shirt, Jim now finds fortune smiling upon his latest efforts in a very favourable light. Yet as a performer who has been around the block a few times, Kerr seems well aware of the fickle nature of the music industry he finds himself in. He explains how he once considered throwing in  the towel…
“Back when we started out, even the Rolling Stones were still young-ish. The only old guys playing music were the old blues musicians. You could see on their faces that music was built into the very fabric of who they were. So here we are, all these years later. And it’s the same with us. It’s not just a career. It’s the centre-piece of our lives and essential to who we are. But, like anyone who does something for a long time, it’s not always going to go swimmingly. You’re not always on the up. You can get bored with yourself. I did briefly feel like giving up once. That is a truth. But, what drives us on is this inkling that we could write a better song or we could be a better live band or I could be a better singer. I guess to us this still feels like a journey worth travelling.”
Simple Minds are on the road for their UK tour this month.
See simpleminds.org.uk for full dates and to buy tickets.
New album “Big Music” is out now.