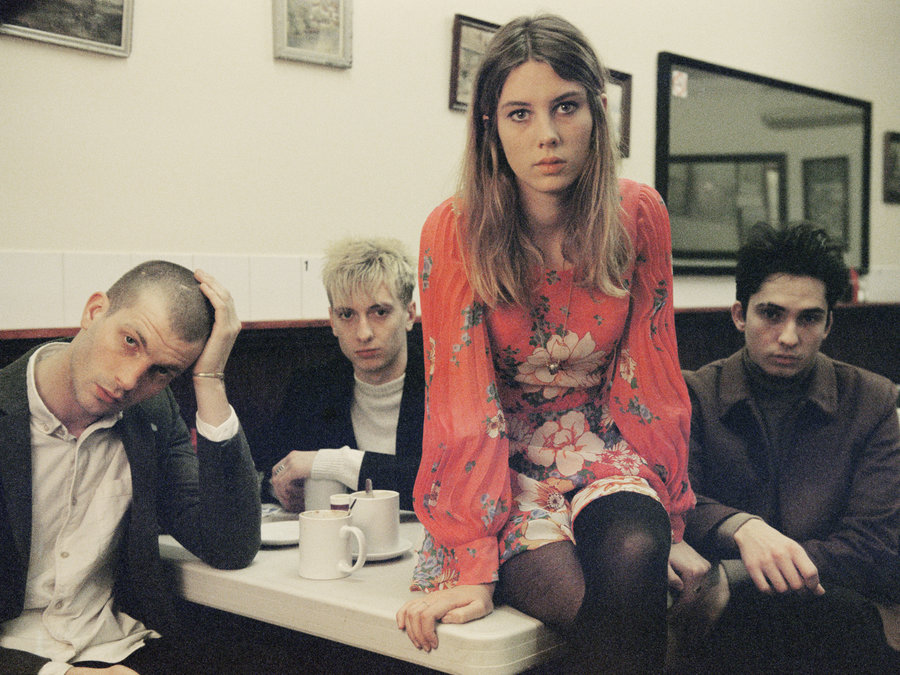 They were dubbed ‘the most blogged about band’ of 2013 and last December saw them win the moniker of ‘Best Breakthrough Artist’ at the UK Festival awards. Having just toured Europe with Alt J and with the U.S. beckoning, it seems London’s Wolf Alice have quite the year ahead of them. XYZ Magazine’s Jimmy Volts caught up with singer Ellie Roswell to find out more about what lay behind the hype…
Those with their finger on the pulse of the UK music scene will no doubt already be familiar with Wolf Alice.  The past two years have seen them rise through the ranks of the indie underground to become one of the UK’s most hyped new bands. So, do they give the media’s comments a wide berth, or do they take them on board?
“I used to think ‘Oh wow! Someone’s writing about me, that’s so cool!’ but recently I’ve begun to think ‘Oh God, I hope no one writes anything mean.”  I think so long as you’re happy  with everything you’re doing, then media opinion doesn’t really matter. It’s only if you have doubts about yourself that it becomes scary. It’s still early days for us though, so I still haven’t quite made my mind up about those things yet.”
This healthy perspective must be part of what makes Wolf Alice such an exciting band. They’ve broken a few moulds in their short time together, releasing two EPs yet refusing to stick to just one sound – a bold move in a scene that constantly seeks to pigeonhole acts before they’ve even got their foot in the door.
“In our early stages, we hadn’t quite figured out what we wanted to play and had quite a few different inspirations. It was good to experiment with releasing two quite varied EPs and at that stage our naivety worked in our favour. It’s quite natural. We just kind of wrote whatever was in our head.”
One thing’s for sure; if they keep writing guitar music this good, the band’s debut album due in June will no doubt be a stand-out record of 2015.
Naturally then, with an imminent release comes the touring. In the past two months Wolf Alice have crossed Europe with Alt J, ventured stateside for their first U.S. headline shows and as you read this, they’ll be knee-deep in their UK tour. So, will Ellie have managed to retain her sanity after such an onslaught of activity?
“Probably not, I’m only just clinging on to it now! (laughs). We’re a little nervous actually. We’ve toured the same songs  for a couple of years but now we’ve got all these new songs to play! Hopefully people will be into it!”
There’s a hard slog ahead for Wolf Alice, but Ellie’s positivity shines through amidst what is sure to be a definitive  year for them.  Catch them on the tour whilst you can, because the next time they  hit the road in the UK, they’re almost guaranteed to have moved on to much  bigger things.
Wolf Alice continue their UK tour in April, taking in Cardiff, London, Oxford, Reading, Bournemouth, Brighton and Cambridge and beyond.
For info about live shows and to buy  tickets, see wolfalice.co.uk/live.
“Creature Songs” EP is out now  on Dirty Hit Records.