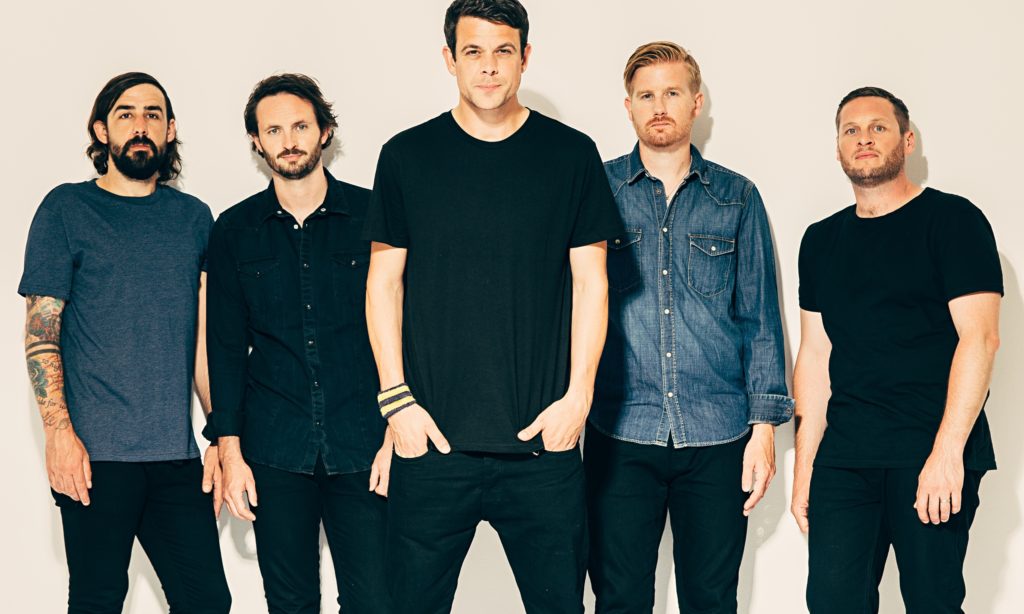 Their debut album “The Day’s War” was released through Columbia Records back in September 2014. Previously to that, Cambridge alt rock quintet Lonely The Brave were notching up the kind of critics accolades that hint of something massive about to happen. Zane Lowe touts them as one of the most exciting new UK rock acts of the moment. In the past year they’ve shared stages with their heroes and have garnered a formidable fan base for their exhilarating brand of emotive hard-core tinged riff rock. Jimmy Volts caught up with drummer Gavin Edgely (Known affectionately to his friends as “Mo”) for a quick chat ahead of their UK tour this month.
Hi Mo! What have we interrupted you doing today?
“I’m standing outside our rehearsal room surrounded by about eight chickens at the moment. You couldn’t make it up really.”
Oh, do you guys rehearse near a farm then?
“It’s just basically a big barn in a field in the middle of nowhere. Which is pretty much how we like it. No distractions like pubs and towns to entice you.”
You’re performing at the Wedgewood Rooms (Portsmouth) and Sticky Mikes Frog Bar (Brighton) on your current tour, both venues have seen many an up and coming band pass through their doors. Are you exited to hit the South Coast?
“Completely, with regards to Portsmouth, we haven’t spent a lot of time down there. But Wedgewood Rooms has been on the circuit for years. People call it part of the ‘toilet’ circuit, but it really isn’t. We love playing those kind of venues and the fact that these shows are selling out is just brilliant.”
Are you familiar with Brighton at all?
“Do you know what? I’m one of the few people who hasn’t made it down there much over the years. I went down there once for a stag-do many moons ago. But the less said about that the better. We played last year with the co-headliner with Marmozets, but perhaps I should be book a holiday and get myself down there more.”
Any excuse is a good one to come down here! So, do you find that the crowds tend to vary much from town to town?We’ve been really fortunate. We all know how lucky we are to be doing this and I don’t think we’ve ever had a crowd to complain about. We’re just all about getting up and enjoying it and seeing what happens.”
What can we expect from the show?
“We haven’t finalised a set list yet, but it’ll definitely be a bit ‘album heavy’. The album hasn’t been out that long, so we want to keep people happy. We’ll probably road test a couple of new tunes also as we’re already thinking about album number two.”
Wow! You don’t stop to breathe much do you. The debut album “The Days War” is brilliant! How was the recording process?
“It wasn’t the easiest album to make. It took us about five weeks to record. And we had to sleep in my step dads building van for some of the time. So it was tough in some respects. But it’s good to look back and realise how far we’ve come. When we recorded it, we didn’t have many aspirations. We just wanted to get a label to put it out. So it’s mind blowing that our little album has now reached so many people.”
Well, as if the positive public response wasn’t enough, you guys have already got to share stages with artists such as Neil Young, Deftones and Bruce Springsteen. How does it feel to have played alongside rock royalty?
“In a word? Intimidating. Especially Deftones, because I personally have been a fan of theirs since the early days. I just couldn’t hope for more. But then all then all shows are a bit intimidating really. You just have to put your nerves aside and do your best. But it’s all thoroughly enjoyable stuff you’ll remember forever.”
So what’s been your biggest stand-out moment so far?
“Erm…I’ve probably got about 350 of ’em to be honest. Touring with Marmozets and Deaf Havana has been a dream. To say you’re playing a sold out show tonight and then getting up to do the same thing the next day has been totally dreamlike.”
And what plans do you guys have after the current tour and for the near future then?
“Once the tours over, we’ll start focusing on writing for the next album. We’ve been in the studio for the last three months so there should be something new coming in the not-too-distant future. Apart from that, just lots and lots of touring…and sitting in vans!”
Lonely The Brave perform at Sticky Mike’s Frog Bar (Brighton) March 21. Doors 7.30pm, £8, SOLD OUT and Wedgewood Rooms (Portsmouth) on March 23. Doors 8pm, £8, SOLD OUT
Words by Jimmy Volts.