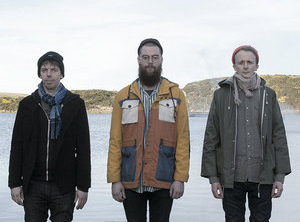 Catching up ahead of their Brighton gig and the release of fourth studio album “Lease of Life” in March, three piece post-electro act Errors are back home in Scotland. Rehearsing new material and getting ready for their much-anticipated UK tour, there couldn’t be a more perfect time for XYZ’s Léo Rahban to catch up with the broadly Glaswegian accented instrumentalist Simon Ward, for a chat about silly album titles, the new opus, how much he loves Brighton, and touring in Japan…
Hi Simon! How are you today?
I’m good thanks! I’m at home in Scotland, sorting out a few band things. We’re trying to work out how we’re going to play the new songs live, so we have to rehearse them a bit. I’ve been away on holiday for the last few weeks, in California. I went to San Francisco, Los Angeles, Joshua Tree desert… It was very nice, I’m a bit disappointed being back, back to real life now!
Your 4th studio album “Lease of life” is coming out on March 23. Why the title?
It’s the title of a track, the first song we had for the album. We kind of had some ideas about what the artwork was going to be like, and those two things seemed to work together. We’ve always had titles that have been quite jokey, close to nonsense really. Again with this one there is no kind of strong meaning to it, it just kind of works with the artwork!
Can you tell our readers what’s different compared to the previous album “Have Some Faith in Magic”?
We’re growing a little bit more confident about making a record and getting the sound right. There is a change, a progression even, in terms of sounds that we used this time. I think there is definitely a very strong positive change.
Is the whole band involved in the  writing process?
Me and Stephen do the majority of it. We kind of work separately and bring ideas together halfway through, work together a bit then go back to working on our own – a lot of back and forth really.
Can you describe “Lease of Life” in 3 words?
Lease. Of. Life (laughs). No seriously, I guess 3 unlinked words would be Enya (90’s recording artist), the 90s, as some sounds from the 90s have influenced our music – maybe not in terms of song writing but music-wise anyway! And….Synthetic plants! Words that definitely won’t help anyone guess the style of the album but that’s the best description I could do right now (laughs)!
What do you want people to feel when  they hear it?
I personally don’t think about the listener much, I know that sounds terrible! I mean obviously I want people to like it… I guess making people dance is the main thing for me.
You’re playing at the Green Store Door on March 31. You’ve played Brighton many times haven’t you?
Yeah, we’ve been there quite a lot over the years, it’s like one of our favourite places  in England! We love to hear that!
Why do you like it  so much then?
Because it’s always so bloody sunny! Actually I was disappointed the last time we were there it wasn’t sunny. It was rainy even! It was the first time in about 10 years that we were in Brighton and it’s not been sunny. I don’t understand it (laughs)… Brighton is a very pleasant place, it doesn’t really feel like the rest of Britain. That’s why I like it so much.  And I think for such a small place there is quite a strong musical scene, which is amazing. In a way it’s a bit like Glasgow because of that.
Favourite hangout in Brighton?
Well I’ve always actually wanted to go to the Green Door Store, but it’s never happened. We tried to go once but it was so busy we couldn’t get in. I like the Hope (now Hope & Ruin) and the Mash Tun a lot.
So you are a Brighton fan…
Yeah for sure, it’ll be the highlight of our tour!
And what surprises do you have in store for the Brighton’s crowd?
Well, we have to think of something nice now you’ve suggested it! Stephen usually is the one that converses with the crowd during the shows. He used to yell out facts during gigs, “believe it or not!” facts. But he’s not done that in a long time. So we might have to ask him to do it again, to bring out some amazing facts just for the Brighton show – a one off!
Are Scottish audiences very different from those down here in the South?
Scottish audiences are quite rowdy, quite loud, but in a good way! We’ve a bit of a reputation for being good audiences. Brighton audiences, to be honest, I don’t remember exactly – but they are good, certainly better than in other places! As long as people are having a  nice time, and not standing about, talking,  I’m happy!
Speaking of touring, do you have any memorable road trip tales?
Last time we went on tour properly was last year. We went to Japan: the best trip I’ve been on. But I have to say the Japanese are pretty mad! One day we came back to the hotel and there were people waiting outside for signatures… We were like “Are you sure you’re not mistaking us with another band?” And they were like “no no no”, so they took lots of polaroids. And as we were trying to get rid of them, Stephen, who is very friendly, nice and naïve, ended up letting them take us out to dinner, which is pretty weird. The Japanese  are a funny bunch… And Stephen has a very good nature, so sometimes he creates awkward situations!
Errors’ new album “Lease of Life” is out on March 23
The band will play at The Green Door Store on March 31, 7.30pm, £9 + bf.
weareerrors.com
facebook.com/errorsband
twitter.com/weareerrors