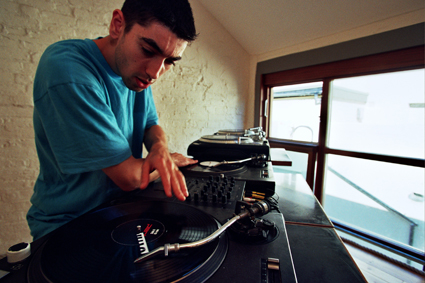 Just talk us through ‘Battlejam’ your night at Audio. Its pretty innovative huh?
JB: Basically, I’ve got this devise called ‘Scratch Serato’, which allows me to record anything plugged into my DJ mixer then scratch it back instantly using records. Originally Beardyman used to come to mine and have a jam where he would beatbox, I would record a loop of the beatbox and scratch/beatjuggle it back. Beardyman would then do a bassline or something, which I would also sample and so on to make live improvised music out of beatbox/scratching. We then thought we could do this live!! But Beardyman couldn’t help him self from being silly and I wanted to sample peoples voices in the crowd. So we setup Battlejam, where we would try and make all the music for the whole night out of drunk peoples voices, live jazz musicians and anything we could think of sampling…And it works! People love it and it’s really silly. It’s all improvised and anything can happen.
Now we are at audio the night splits up into parts where we let music play for people to have a dance and for us to sit down and laugh at what’s been going on so far. Luckily, we have the well know producer Ed Solo engineering us to make sure that the sound levels are alright and stopping us when we go a bit too silly.

So, you’re the DMC UK champion…tell us about that…looking forward to the world Finals in October?
JB: It’s sick!! Although, I need to get better, and have been practicing all the time, a lot of sleepless nights to try not to shame the UK’s turntablism community. I’m chopping up the UK routine and changing lots of it for the Worlds… I am looking forward to it, yes.

How did the Beard and yourself hook up? What’s your working relationship like?
JB: I met Beardy at a DJ comp in 2005, I didn’t like his beard at the time and helped him develop it but then he shaved it off again.