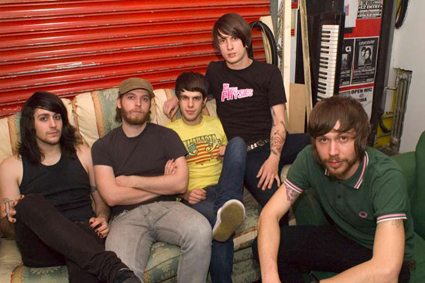 If you haven’t come across This City yet (Err, where have you been?) today is your lucky day! I met the 5 Indie-Hardcore tattooed boys to discuss their first single, being on TV and of course, what’s it like being a band in Brighton. This City has already been on Radio 1 and Channel 4, supported bands like Future Of The Left and Sparta and spread their contagious sound all around the UK. As well as being super edgy and avant-garde, they’re gorgeous and über friendly. What more could you ask for?!

XYZ: Hi guys! It’s lovely to meet you all today 🙂 So, who’s in This City then?
Arran: Hi, I’m Arran and I play guitar.
Chris: I’m Chris and I’m a hypocondriac!
Everyone: **Laughs**
George: Hey, I’m George and I just play bass.
Grant: I’m Grant and I play guitar.
Ben: I’m Ben and I have happy tourette. It’s true!

XYZ: I’ve read descriptions of your music by loads of different people; how would you describe it in your own words?
Grant I tend to repeat what everyone else says really!
Arran Indie disco with an hardcore edge. We’re heavier than the rest of the Indie bands out there.

XYZ: What are your influences?
Arran We all vary really, every member has their own individual bands that they like. We all like bands like The Bled and Everytime I die, which are American hardrock bands. And I like some Alternative Hip-hop, and bands like Why.
Chris I grew up on Brit pop!
Grant I just like a lot of accoustic stuff..
Ben We all collectively like different styles of music but we come together as a band and make the music that we make through all of those influences.

XYZ: You’re Brighton formed and based – what do you think are the pros and cons of a place like Brighton, with so much artistic creativity all around?
George Everyone is in a band so it’s difficult to get people to come and see you. There’s always like 20 shows on at the same time! That’s probably our biggest challenge to be honest.
Arran But it creates a good scene. Everyone knows everyone and helps each other out. It’s a good network!

XYZ: Are there any other local bands you like?
Arran Cat the Dog that we toured with, The Architects, Dead Swans. And there is also Maths Class that we’re good friends with, we played a lot of earlier shows with them.
Chris One of our drummers is in The Pipettes now!
Arran And our other drummer joined The Architect so…

XYZ: Two drummers gone…But you’re all together to stay now right?
Everyone smiles and looks at Ben…
All Yeah yeah definitely!

XYZ: You’ve been on the road quite a lot in 2007 – How does the Brighton crowd compare to other crowds throughout the UK?
ArranThere is a big difference! It’s hard to impress the Brighton crowd – their arms are usually folded, whether they like you or not, that’s their stand. When we play at other shows we get a lot better feedback from the audience. People get into it and dance.

XYZ: Do you have any live dates for 2008?
Arran Well we haven’t been told yet, they’re keeping it quiet. Check with our management and let us know!

XYZ: You released your debut single “Romantic/with loaded guns” in Sept 07, what’s coming next?
Arran We’re doing another song which is on myspace – “Kids with fireworks…”and that’s gonna be out in February time. And we’re gonna do the video which we’re shooting in November.
XYZ: Where are you shooting it?
Arran: We’re gonna be shooting it in a school hall but it could be anywhere really..There’s a rough idea for it…There’s gonna be a lot of TV screens everywhere apparently.

XYZ: Are you involved in the creative process of the video?
ArranNo, not really…
George We could say we are?!
ArranWell it’s made by a Brighton based video company, they’ve made Juliette And the Licks and Fatboy Slim videos and they also made our previous video. They’re really professional (And they’re called “Nothing To See Here”)

XYZ: You went on the T4 programme called Mobile Act Unsigned in October. Can you tell us a bit more about the experience?
Arran We didn’t know what to expect really – We sort of got pushed onto the programme because they used our video to promote it. We were just told “you guys are through so you’re playing there”. So we thought we just go to London, play a song and come back to do a show that evening. We got up there and the first thing they said was “Hi, we’re your film crew for the day”. They asked us what we were into (tattoos) so they took us straight to a tattoo studio and we got some tattoos done, then they took us straight back to the venue and we were told to perform! We didn’t realise it was going to be the whole X-factor thing – but we couldn’t really not do it so we did our thing and for some reason we played two songs. They were a bit unsure about our style! Got some bizarre comments and told them we didn’t want to carry on with their competition. It wasn’t for us! It was a weird experience. We didn’t really want to carry on.

XYZ: So, although you got through, you decided not to carry on!
ArranYeah
George It was good promotion for us though!
ArranIt’s the way they edit it as well.. We got away with it quite well but they edit it in a way that takes the piss out of all the bands, whether they’re good or bad…They can definitely destroy a band… They also asked us how many tattoos we have and we were like well you can’t really say, George has got like a sleeve, does that count one tattoo or is it like..So we told them how many hours we’ve had and they made it up anyway – they said like 41.

XYZ: That’s one of my questions!!
GeorgeThey also said we listen to my Chemical Romance…
Arran That’s a band that none of us listen to! They make it all up basically…

XYZ: Going back to Brighton, what’s your favourite hang out?
ArranThe Penthouse..! (Everyone Laughs) You guys go to the Barfly a lot don’t you?
BenYeah and Caroline as well.
Grant Ben, you like the Oceana as well don’t you?
Ben Oh yeah, Monday nights there are really good – it’s got everything you want in a club. It’s like the Disneyworld of Clubs. It’s really nice there!

XYZ: So, you met at a tattoo convention; I was wondering how many tattoos you have between all five of you?
Arran It’s hard to say …George has a sleeve, does that count as one?
George Hmmm, probably like four?
Arran Just two actually, just the two..
Everyone **Laughs** (They’re all covered in tattoos)

XYZ: If your band was a tattoo, which design would it be?
ArranErrr…That’s a difficult question…
George What about the “This City” one that you got?
ArranOh yeah, that’s a good one I guess..!

XYZ: So we go with the one that says This City then….
Arran Yeah, well I guess so! Very original…!!

XYZ: Can you show us, where is it?
Arran lifts his bottom trousers and shows us a nice “This City” tattooed on his calf.

XYZ: What was the most random thing that’s happened to you as a band?
Arran Well the T4 thing was pretty random really…But that fight we had in …
Ben Chichester
Arran Yeah we were playing a show in Chichester and after the second song some kid in the audience started shouting **arse*** And then he grabbed the mic off George whilst George was trying to wrestle him. So we’re all flying the sides, then he tries to pull the leads out of one of the monitors so I approached him, I squared up to him while I’m playing…Then we got a bit down in the song where we all got lost where we were really. Then it all went off and the audience started fighting amongst themselves and we were like errrrrr..! But we finished the song and then the people got kicked out so..It was great! That was the most random really!

XYZ: Finally I have a very much Brighton orientated question for you: Seagulls or no seagulls? (I’m talking about the birds!)
Ben No seagulls
George I hate Seagulls..We like the sea girls but not the seagulls..

XYZ: Are you all pretty much against the seagulls then?
BenWell I mean they can do what they want really!

XYZ: Because they’ve been stealing food from people on the street and on the seafront, people seem quite scared of them…Some people have suggested we feed them poisonous raisins which make their stomach explode..
Ben That’s pretty full on!
Chris I wouldn’t go that far…

XYZ: So we can say This City is not a huge fan of the seagulls but no culling?
Arran Yeah, that sounds fair.

XYZ: Thank you very much for your time guys, it was lovely to meet you all!