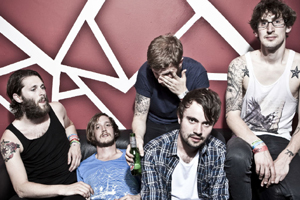 Those in the know will already be well aware of our cover stars Dry The River and their stunning debut album ‘Shallow Bed’. The London-based acoustic Alt-Folk five-piece have worked relentlessly this past year and the fruits of their labour are finally paying off. Having given a number of seminal performances at last year’s Great Escape Festival, they’ve since gone on to tour throughout Europe and beyond in a whirlwind of public adulation. Jimmy Volts spoke with lead singer Peter Liddle to attempt to get to the bottom of what makes them so special.

Dry The River’s journey up until this point has been a truly unique story. Their formation stemmed from the ashes of various Hardcore and Post-Punk bands back in 2009, and their re-birth was punctuated by frontman Peter’s compulsion to create music that was a complete departure from their previous collective efforts.
Opting for acoustic instruments served to remove them from their comfort-zones and they focused predominantly on honing a new direction through numerous live performances. They soon developed their own unique blend of Alternative Folk and began building a fanbase, but mounting pressure from their record label soon lead to the creation of ‘Shallow Bed’, though it didn’t come easily.
“Part of the reason it took us so long to make a record is that we’ve always been more of a live band. It’s obviously really good to hear people saying positive stuff about the album, but we try not concern ourselves with that really. It can be quite difficult when you hear negative reviews and what-not, so we try not to get too absorbed in the public’s perception. We just endeavor to keep our heads down and do what we all do best, which is to play shows.”
This tireless work ethic has lead to the cultivation of a fiercely loyal fanbase, which is growing faster by the day.
Their shows are a rapturous blend of soul-baring honesty and laudable musicianship, all rounded off by the the obvious fact that they’re loving every second. Another major factor to their appeal is that Liddle seems to wear his heart on his sleeve with his impassioned vocals. One listen to the beautifully candid ‘Weights & Measures’ is more than enough proof of that, or so one would think.
“I’ve actually always felt like I’m fairly guarded emotionally. Some of the songs are more personal and some I feel are more imaginative. Musically, I consider the lyric writing to be a completely separate entity to the music. But the more I go on, the more comfortable I am with injecting more emotion into the songs.”
There’s an apparent theme of a lost love hewn throughout the album, though Peter is quick to disperse such assumptions.
“There’s not really a literal or emotional story within the album. I see it more as a narrative of our journey as a band up until this point. It’s not necessarily in chronological order, but it’s most certainly a documented journey. Kind of like Dry The River from birth to the present.”
Regardless of the formula, it’s obvious from the recurrent waves of praise that they have the balance jsut right, with the music translating in both intimate and larger venues. Last year’s festival saw them perform upstairs at Audio to a modest audience of fifty or so. This year however sees them take to the Corn Exchange, which has served as a launchpad to the big time for many bands before them. So are they ever tempted to stray from the eye of the storm and get swept up in it all?
“Well, we love playing smaller venues and getting a rapport going and chatting to people, but we love playing the bigger stages as well. Ideally, we try and have as much fun as we possibly can regardless of how many people are watching. In a way it’s much more of a challenge playing to a half-full 100 capacity venue then it is to play in front of three thousand people, because you have to engage and involve people a lot more. It’s nice to play bigger venues, but we like to keep things intimate also.”
So in an effort to put the resounding success of the past twelve months into perspective, what has been the proudest moment for the band up until this point?
“The freshest thing that springs to mind is the beginning of this tour, playing the Rescue Rooms in Nottingham. We went to sing ‘Weights & Measures’ and the entire crowd sung all the words for us, which had never really happened before. We had this moment where we thought ‘shit, this is amazing’. That was an extremely proud moment for us. I guess now the record’s out people have heard it and are coming to the shows to show their support, which is really nice.”
You can experience what all the fuss is about for yourself at the Corn Exchange, May 11 at 23.45.
Words by Jimmy Volts