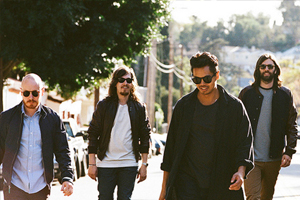 This time four years ago, the Temper Trap were performing at The Great Escape festival as a breakout band. Back then, they were at the centre of considerable industry hype as their debut album ‘Conditions’ dropped worldwide. Lead single ‘Sweet Disposition’ became the international lover’s anthem and the band were catapulted into the ether at terminal velocity. Jimmy Volts caught up with bassist Johnny Aherne amidst rehearsals for their upcoming tour to get the lowdown on their self-titled sophomore L.P.

You would have to have hidden under a pretty sizable rock not to have heard The Temper Trap at some point over the past three years. Their stadium-ready Pop/Rock has enjoyed a near-constant chart presence since the release of their debut album ‘Conditions’. But with such esteemed commercial acclaim, comes the inevitable pressure to deliver the goods for the second time running. So how did they feel about this momentous task?
“When we first finished the new record we were all pretty happy with it. Now we’re in this funny ‘limbo’ stage, prior to its release. We’re in anticipation of how it will be received. We had about eight months of writing for the album and there definitely moments where we pondered whether it was as good as ‘Conditions’. But it feels like we’re progressed, so we’re happy with it.”
The band are also enjoying a breath of fresh air in the form of Joseph, their new full-time keyboard player. Did they feel this augmentation of the line-up was a necessary to move on?
“We certainly strived for this record to have the same strengths as our debut but our real intent was to advance on what we’d done before. We wanted to make sure we’d progressed and made things better. Joseph was a touring member with us from quite early on, so it didn’t really feel like much of a transition making him a full-time member. Making it official has brought quite a new balance to the band though and it just felt like a good expansion to have.”
Within the seemingly constant fluctuations of today’s music industry, it seems change is always a good thing. So a departure from the band’s previous subject matter of love and loss would seem appropriate. The new album sees the band take a step in a more socio-political direction with album track ‘London’s Burning’, which centres heavily on last year’s’ riots. So what did the band make of the events in London last year?
“We all live in Hackney, which was pretty central to where it all kicked off last year. We had that track on the go, and our vocalist Dougy felt like it was a personable thing for him to write about. It was a scary moment for everyone in the city. But it’s more of a social commentary from both perspectives more than anything, the law and the lawless. Kind of like two sides of the same coin really.”
It would seem somewhat cliched for the Temper Trap to have donned the guise of a politically motivated band with this album, especially considering the central themes of the first. But it’s good to know that they’re pushing things forward and trying new ideas on for size. Speaking of progress, it’s worth noting that their last appearance at Great Escape saw the Temper Trap perform a breakout set to a relatively modest crowd. This year sees them return to perform at one of our most prestigious venues, The Brighton Dome. So how do they feel about this unadulterated rise to prominence over the last few years?
“It’s crazy really. You can listen to the stats on the album sales and chart positions. But what does that really mean? The things that really hit home for me are the more tangible moments. Like when my mum was queuing behind someone who had our song blaring out on their ipod in a supermarket in Australia and called me up to tell me. That to me is pretty funny. It means the music has connected, y’know?”
Johnny’s relaxed manner when discussing the band’s international status may seem somewhat understated. But his laid-back Aussie standpoint is completely valid and adds to their charm in a way. After all, the band were the first to proclaim during the media storm surrounding their debut, that they are in-fact ‘nobodies’ who simply got lucky, plain and simple. So, with such a relentless tour looming over them for the coming months, how do Johnny and co’ relax whilst on the road?
“Well I’m certainly no ‘road warrior’, but having shows in such amazing places means I get to go on these big walks, which I love. Our new member Joseph likes to walk too. We enjoy getting lost on our own, but somehow, we always end up at the same random place, like we’re magnetised or something.”
Perhaps this unexplained ‘magnetism’ is a sign that having taken a step in an altogether different direction,  the Temper Trap are in-fact on exactly the right path. Decide for yourself when they debut their new material at the Brighton Dome for the Great Escape on Friday May 11.
www.thetempertrap.com