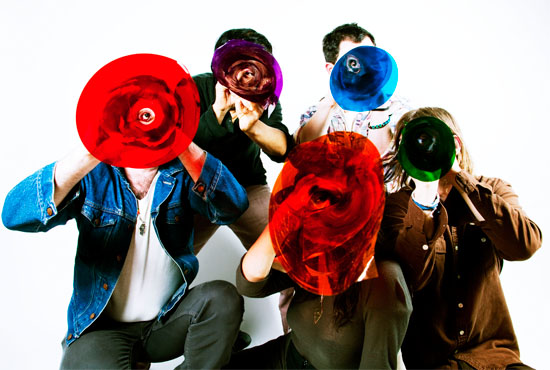 Gang Gang Dance started life ten years ago as an experimental art project, performing spontaneous improvised sets in art galleries and fashion shows across New York City’s Soho district. Their sound is an eclectic mix of World Music, Krautrock, Techno and Phsych-Trance, with a healthy dose of modern-day free Jazz thrown in for good measure. What’s more, they topped the XYZ reader’s poll as the act you’re most looking forward to seeing at this years’ Great Escape. Jimmy Volts caught up with founding member Brian Degraw who explained why their latest album ‘Eye Contact’ is their greatest yet.
“This is the best I’ve ever felt about a record of ours and I think everyone in the band feels the same way. Previously, we’ve had to make compromises with the finished product. But something feels really good about this one. It’s very realised as a whole and we’re all really happy with it.”
The band recently generated a small-scale blog storm with an online preview of opening track ‘Glass Jar’, which hinted at a more ambient approach compared to the ambitious free-reign jams on their previous albums.
“Recording at home in New York City can be pretty rushed and brutal, but we recorded this album in Dreamland studios, near Woodstock. ‘Glass Jar’ is an example of how the more relaxed studio atmosphere is reflected in the music.”
The new album was produced by long-term friend Chris Coady (Beach House, Zola Jesus), and recording in the spiritual home of the ‘hippy ideal’ has obviously had a positive affect, which is why so many of you are looking forward to catching them at this years Great Escape Festival.
“The Brighton crowd definitely seem more open to experimentation, and it’s always a relief when places are coming from that angle. It makes me feel a whole lot better about playing there.”

We asked Brian to sum up the GGD live experience for the benefit of those who’ve yet to see them.
“We’re pretty different in a live setting compared to on record. But this new album is the closest we’ve been to synchronising the two. There’s a lot of space where we honestly don’t know what’s gonna happen. It’s about 30% improvised, but that’s the part I look forward to the most.”
After their Brighton sojourn, the band will head off to All Tomorrows Parties, which is being curated by long term studio buddies ‘Animal Collective’.
We asked Brian who he would include on his own dream festival line-up.
“Oh wow! Well, there’d probably be a lot of similarities with this years line-up. We’d definitely have the Boredoms on there. But I’d probably choose more free-Jazz artists because they’re so rare nowadays. In an absolute dream line-up, Alice Coltrane would be there for sure.”
ATP has always maintained a healthy mix of art and music, and GGD have both in spades. They regularly feature projections and visuals in their live sets. So which category do the band identify with most?
“We were born out of an art scene. The first three years of our existence we performed at friends’ galleries. We didn’t rehearse and never really thought of it as a band back then. We gradually moved into music venues. But we’re still extremely involved in the art world.”
Perhaps it’s this appreciation of aesthetic art as well as audible variety that sets the band apart from their peers. Brian explains what he thinks makes them so unique.
“It’s just openness. Not trying too hard to be one thing or the other. We just let things happen naturally and let the music create itself, rather than us trying to steer it. Our approach is anything but traditional, It’s all about the subconscious. We improvise for hours and there’s no preconceptions about what we’re creating. It drives itself and we just kind of follow it. I Guess that’s what interests people about us.”
GGD have been creating their own brand of audio visual art for well over a decade now, and they’ve obviously found a formula that works. But what do they feel is the secret to their longevity?
“It’s become like a family y’know? And once that idea took hold, the notion of not being together seems really strange. Ten years passed without us knowing, and It hasn’t been much of a struggle. We’ve had our ups and downs but it’s been a very natural time. I think everybody in the group sincerely needs this band. It’s very therapeutic.”
Words By Jimmy Volts.
ganggangdance.com
myspace.com/ganggangdance