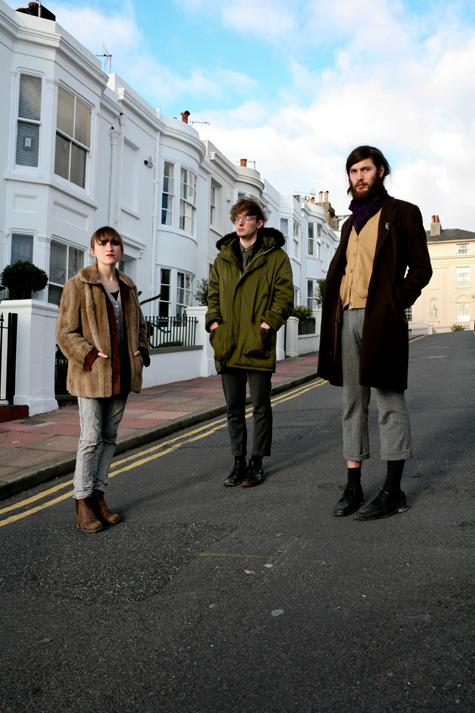 Back in Brighton after their US tour, Matador signing Esben & the Witch recently made 8 on the prestigious BBC Sound of 2011 list. With the release last month of debut album Violet Cries, and a schedule of European dates spanning February, XYZ’s Lizzie Simner caught up with the Brighton trio ahead of their show this month.

They are Thomas Fisher on guitar/keys, Daniel Copeman on guitar/electronics and Rachel Davies with vocals. Davies has been compared by many to Florence (& The Machine) Welch, and the bands dark and beguiling sound has recently earned them a wealth of media attention and industry acclaim.

The band was formed in our very own Brighton, with their first released (EP 33) out in 2009, they named themselves after a Danish fairy tale.

“Thomas and I stumbled across the story and liked the imagery and ideas, although I wouldn’t claim any in depth knowledge!”, admits Daniel. “People always ask, and now we’ve been interviewed by German press and are getting closer and closer to Denmark, it’s worrying! They expect us to be experts in Danish fairytales!”

Having performed at festivals and with the likes of Deerhunter, Sian Alice Group and XX, Esben kicked off 2011 with a schedule of American dates. “Detroit was my favourite show, it’s run down and quite empty but the people pull together and travel far to do things like see a gig” Thomas reflects. “A lot of creativity seems to be happening there. And Seattle was cool” .

“For me it was LA, because I love opulence!” laughs Daniel. “USA was just great, we would be driving down highways that would suddenly shrink into one lane, these routes would just disappear off into dust! All whilst listening to Yellow Swans, which is this really schizophrenic metal jazz!”

For the next month Esben are on the road completing their European dates, sharing with thousands their own brand of gothic indie, but how does their unique sound come about during songwriting?

“It’s about trying to fuse a musical idea with a theme to create an atmosphere” Thomas muses. ”We want to produce music that evokes the atmosphere that you have in your mind” adds Daniel, “It can be hard to say for instance ‘I want to write a song that has the sense of a Victorian funeral procession,’” Daniel continues, “There’s no way of knowing when you’ve achieved that and when it’s finished. A lot of the time it gets so pared down that the original sound is lost.”

Moving on to discuss their October debut for Matador, “Marching Song” has rather a gory video. (Blood, bruises and broken glasses – watch it yourself online). The band must have spent a long time in make up! “I was smoking at the time and the eye attachment I had to wear (Very convincing swollen black eye makeup) …had alcohol in the glue and so I couldn’t smoke or it would set alight – after 15 hours shooting it got a bit annoying” Confessed Rachel.

“There was one bloke whose job it was to smash up my glasses” Thomas recalled “He would go outside with a little wooden hammer every now and then”. We all have to start somewhere…

As our time together comes to an end, we discuss the seemingly endless stream of talent rising from Brighton, we thought it fitting to ask which Brighton bands Esben would recommend? “Abbey Waide” Daniel jumps in “On BBC South, she had a cello, box and bass drum pedal and made these ramshackle folk songs – she’s getting a band together so I’ll be interested to hear them”. And Rachel,

“I want to hear the new British Sea Power album”.

Esben and The Witch play The Pavilion Theatre February 1.Debut album ‘Violet Cries’ is out 31
esbenandthewitch.co.uk/