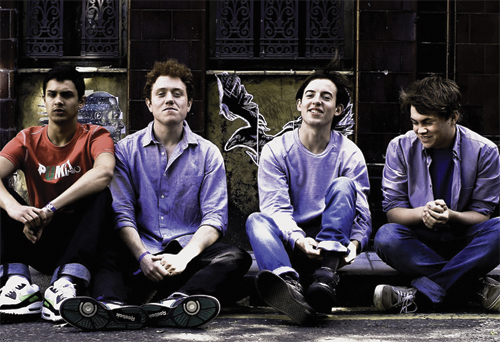 Last time we caught up with Bombay Bicycle Club they had just released  their second album “Flaws”, an entirely acoustic L.P, showcasing the groups’ more sensitive side. XYZ’s Jimmy Volts talks to guitarist Jamie Macoll for the lowdown on this new direction, PLUS Brazilian’s and OF COURSE their highly anticipated third album.
British indie band Bombay Bicycle Club first shot to fame after playing the opening performance of  V Festival 2006.  After winning Channel 4’s ‘Road to V’ competition, beating fellow Londoner’s The Holloways to win the opening slot at the festival, the band rocketed into the public domain. Following the release of two EPs and debut single “Evening/Morning”, the band recorded debut album, “I Had the Blues But I Shook Them Loose” in July 2009. Their second offering was released in summer this year, acoustic album “Flawless”.
Life since then has been a whirlwind for the band, having spent recent months on the road for their acoustic tour, as it comes to a close, are they still fond of their stripped down alter-ego?  “We’re all very proud of it” Jamie tells us.  “…but we didn’t really want to make too big a deal out of the acoustic album. We wanted it to be an ‘under the radar’ type thing, more like a side project.
Fans and industry alike were surprised by this acoustic focus from the band at such an early stage, was this the reason for wanting to keep it under the radar we wondered? “It was strange timing” Jamie reflected. “Most bands don’t release acoustic albums until further along in their careers, but we had the songs, so we thought why not?”.
Album “Flaws” truly does represent an unexpected departure from the angular Pop wizardry of their debut. And the tour saw them perform at some beautiful locations, including St Georges Church in Brighton. “It  was… er… interesting actually. We tried to rig up our own lights for that show, but they were too much for the wiring in the building. (Laughs) We blew the fuse and couldn’t get into the priest’s office to fix it!”
With the tour over, the band have their sights set firmly on the next album. So how is the third instalment shaping up? “It’s going well so far. We’ve been in the Norfolk countryside writing songs and I’d say we’ve got half the album written. It’s going to be fully electrified though, like the first album.”
BBC have already achieved more than most bands their age could dream of. They’ve notched up a major label record deal, won NME’s band of the year award and played countless music festivals around the world. So what adviced do they have for bands who are currently just starting out? “Find a good drummer. That’s hard, but very important” Jamie impressed upon us. “Also, write as many songs as possible before putting yourself out there. It can be very dangerous to get signed off the back of just a few songs, because then you’re under pressure to deliver more material. Rehearse a lot. (Something we don’t do enough of!). And have fun! There’s no point in doing it unless you’re enjoying yourself.”
So with the end of the year fast approaching, what has been the standout highlight of 2010 for Bombay Bicycle Club? “Our single going top ten was pretty amazing. We weren’t expecting that. And playing in Brazil recently was cool… especially the women. (Laughs). “ I can honestly say I’ve never seen so many beautiful women in my life. Obviously I couldn’t approach them because I can’t speak Portuguese.”
What a long way they’ve come since their very humble indie beginnings in Crouch End?! Whether it’s wowing festival crowds in the many thousands or jetsetting off around the world .Catch these Brighton favourites at their next show in Brighton this month, and if you’re not already a massive fan when you buy your tickets, you will be by the end of the show!