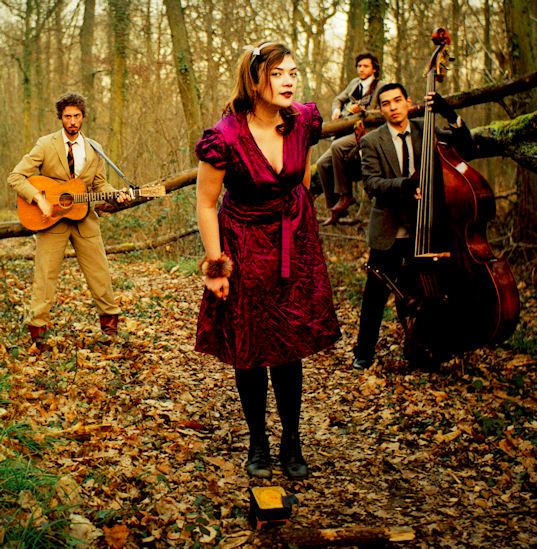 From the beautiful horse’s mouth Moriarty sound like: “a velvet couch, a subterranean salt cathedral and the Russian Taiga.” Hailing from everywhere, but especially cherished in France, these bohemians were playing only two nights in the UK amidst their most fruitful of chapters. I had naively expected a healthily busy Freebutt, full of bustling twiglet-legged poets and ladies of the grander sense. Sadly it was dead.

After some oddly assigned support acts, the stage (Parisian arts studio?) finally awoke. Five characters swept onto the boards, assigning themselves to instruments seemingly randomly, taking whichever bugle, double bass, glockenspiel was closest. From the start the band (named after the main character in Jack Kerouac’s “On the Road”) delivered their off-beat structure and glaring melodies to some effect and, gradually, begrudgingly, the fifteen strong audience tapped toe and nodded head to their design.

Rosemary Moriarty’s cabaret fuelled distance had a somewhat haunting effect on her hollowed and motherly voice, a voice which commanded the room and, seemingly, the rest of the band. This seemed to carry on to such an extent that the others appeared bewitched by her tone, like snow white and her four (musical) dwarves. Aside from the clear foundations in dramatics and action the band’s sound held strong the sanctuaries of blues and folklore, with twisted rhythms and stomping percussions of all shapes and sizes, which positioned Rosemary and her ‘Grace Slick/Nina Simone’ vocals perfectly.

Singing “…all I ever needed, is here in my arms” while holding the head of a deer (in her arms) will always create a certain tone within the audience, an intriguingly unsure tone. Intrigue is one of the band’s prime assets, one which they comfortably achieved through the set. Harmonica inhalation, double bass spinning and slate torn guitars set the pace for what at times became the most stomping of rhythmic eves our city has recently seen. This is driving music if, and only if, you are traveling through 1940s Europe with a group of wondering types and a cat named Binky. Sort of “Fear and Loathing in Omsk”.

18th March 2010
Subscribe
Connect with
Connect with
0 Comments
Inline Feedbacks
View all comments
SEE XYZ IT'S ON! Click for more