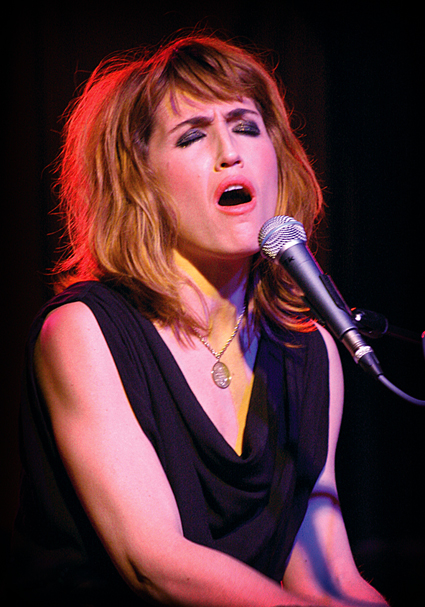 Joan Wasser is blessed with a wealth of natural musical ability, from violin (which she began to learn aged 8) to her regular solo instruments of piano and guitar. Enticing an enviable crowd out on a freezing Sunday evening is some feat in itself, but when you are treated to an hour and a half of oddly comforting music from an artist who pretty much defines self-assurance, it’s easy to forget about the world outside and impossible not to let yourself get drawn in. Simple yet lush arrangements are the hallmark of her music, invoking the warm sense that everything is in its right place.

“Real Life” was at once timeless and fresh on its release a couple of years back, pairing aching, stripped-back soul with knowing pop nous and intimate production that frequently made it sound like she was whispering her sweet laments right into your ear. With most of her songs clocking in around the three-minute mark, the majority of that album was played over the course of the evening, with the gorgeous title track starting proceedings in elegantly understated fashion. Her second full length “To Survive” came out in the summer and served to further establish and evolve her sound to new levels of quality.

The set did suffer slightly from odd pacing – most of the slower-burning groovers were brought in early on – but this is really nit picking. The quality of the material quickly dispelled any uncomfortable pauses and Joan’s friendly, laid back personality eased the crowd into the palm of her hand. Looking stunning in a black off-the-shoulder ensemble, she commanded the microphone, assisted on backing vocals by multi-instrumentalist Timo Ellis and drummer Parker Kindred who both acquitted themselves admirably without ever overplaying their roles, even taking the places of Antony Hegarty and Rufus Wainwright respectively on “I Defy” and “To America”.

A prowling version of Hendrix’s “Fire” was rendered an entity all her own, especially during the fuzzed-up chorus, in which her beautiful voice reached some seriously high pitches, before a stripped back acoustic version of Terri Clark’s “Keeper of the Flame” brought us to the end of the set with truly mesmerising beauty. Consistently satisfying the largely partisan crowd, it’s clear that Joan is a strong woman writing classy, memorable music. And that is something that can be only be wholeheartedly embraced.