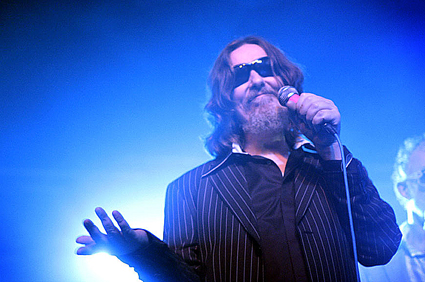 The “Alabama Muthafuckin’ Three!” (as they are gleefully announced by a small, unknown Welsh lady) are not a band to compromise. Operating decidedly on their own terms throughout their career, their forthcoming album has been a truly interactive conception, with tracks chosen by fans throughout the year via their rather entertaining website. Arriving in Brighton for two consecutive nights at Concorde 2, the clouds of evaporating perspiration inside the venue rise in stark contrast to conditions outside, where the temperature has dropped below zero.

The BBC are here filming tonight and, showing their experience, the band never misses a beat. The sprightly figure of Larry Love, his eyes permanently hidden by shades, lead the narcotic charge through their blend of rocking acid-house and countrified psychedelic singalongs. Naturally, we are treated to raucous versions of many tracks from the classic “Exile On Coldharbour Lane”, along with choice cuts of new recordings, which may or may not feature on your copy of the album; initially at least, fans will be able to select their own tracks and tracklisting from a wide selection, a bold experiment in music delivery.

The live performance has always been an integral aspect of what Alabama 3 do, and they are supremely adept at working a crowd, effortlessly raising the temperature and slapping a smile on faces, which of course is no bad thing. The rest of the nine-piece band, despite keeping things tight and energetic, have a tendency to get overshadowed by the antics of their frontmen, but equally things just wouldn’t be the same without Larry’s deep growling tones and D. Wayne’s stoned philosophising pushed to the fore.

The real standout of the night though, and something of a secret weapon, is the delightful Miss Devlin Love, whose frankly fantastic voice propels the music to levels that without her it just wouldn’t reach, launching classics such as “The Night We Nearly Got Busted” into skanking anthemia and fronting a stripped back version of “You Don’t Dance To Techno”, during which bouts of country dancing threaten to engulf us all. Towards the end things do start to get a little repetitive, or maybe I’m just tired, but the band can’t leave without playing their much-beloved anthem “Woke Up this Morning” to send the delightfully random mixture of dreaded hippies and greying ex-ravers off on a complete high.

Eat Your Heart Out Brighton!