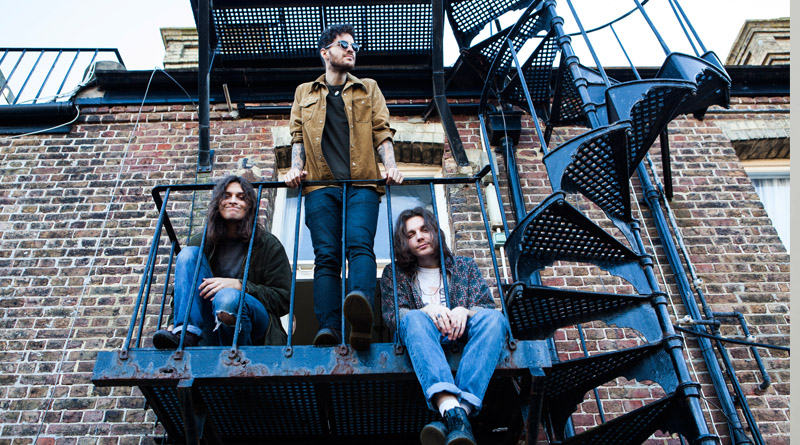 NEW MUSIC PREMIERE
One of the newest bands on the Brighton scene to be making a name for themselves at an alarming rate. Sick Joy moved south to Brighton in September 2016 and played their first show to a sold out Patterns with fellow north-to-Brighton bands Demob Happy and Tigercub. The band have a solid set of bangers but the only tune available to hear so far is the demo for the song “Heaven” on their soundcloud… UNTILL NOW! The band have kindly given us the premiere for their debut video for their new single “Stars”. Feast your eyes and ears and have a read of the Q&A we did with them below.

Who are Sick Joy?
Mykl, vocals and guitar, Danny bass and Drew on drums.

Who would you say is your musical family tree?
We all grew up listening to similar bands from the early 90’s. Pixies, Nirvana, early Weezer too. Stuff like that. So a large part of our writing comes from those foundations. I think there’s a lot of disparate influences between the three of us too though. Our ‘musical foliage’. Tree puns.

You’ve just dropped the video for “Stars” with us! What is the song about?
It was about a time in my life that everything was kinda heavy and observing how to deal with it. The songs are often, rather than being about one set thing, a culmination of everything that’s happening during that period of life. It’s never really linear and succinct lyrically, more of an erratic mashing together of stuff. Which is kind of apt.

What’s next up for you guys? What do you have planned for the rest of the year?
We’ve got another single coming out in the next month or so. We’re recording a bunch of new stuff depending on finances. We’re also sorting a few tours for later in the year with plans for getting over into Europe. The plan is just to gig as much as we can to as many people as we can because that’s the whole point right?

When’s your next show?
Next show is at The White Rabbit in Brighton for Alternative Escape

Check out Sick Joy via the following links below:
SPOTIFY
FACEBOOK
SOUNDCLOUD

1st October 2018
Subscribe
Connect with
Connect with
0 Comments
Inline Feedbacks
View all comments
SEE XYZ IT'S ON! Click for more