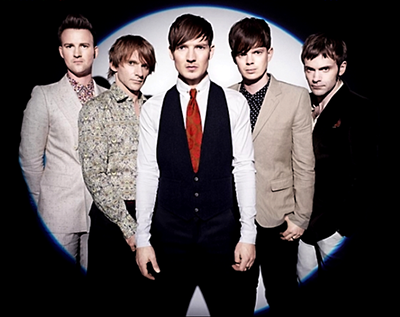 The Feeling will embark on an 11 date UK tour in March, taking in Nottingham, London, Liverpool and Brighton.  The indie pop act from nearby Horsham and London are made up of vocalist Dan Gillespie-Sells, bassist Richard Jones, guitarist Kevin Jeremiah, keyboardist Ciaran Jeremiah and drummer Paul Stewart.
After a sold out UK Tour including a show at O2 Shepherds Bush Empire, the band are set to release new single, ‘Fall Like Rain’ out March 24th, with a tour of 11 further dates in March to support the release.
Produced and written by The Feeling, ‘Fall Like Rain’ is the band’s third single taken from fourth LP ‘Boy Cried Wolf’. The album has spawned two Radio 2 A Listed singles, and was hailed as the album of their career by The Sunday Times Culture and Q Magazine.
The tour takes in Edinburgh, Sheffield and Nottingham, before wrapping up here at Brighton’s Concorde 2 on March 24th.
Tue 11th EDINBURGH, Liquid Room
Wed 12th SHEFFIELD, The Leadmill
Thu 13th NOTTINGHAM, Rescue Rooms
Sat 15th NORWICH, Waterfront
Sun 16th HOLMFIRTH, Picturedome
Mon 17th MILTON-KEYNES, The Stables
Wed 19th EXETER, Phoenix
Thu 20th PORTSMOUTH, Wedgewood Rooms
Fri 21st LONDON, Koko
Sun 23rd LIVERPOOL, O2 Academy 2
Mon 24th BRIGHTON, Concorde 2
Tickets for all shows are currently available from thefeeling.com/gigs