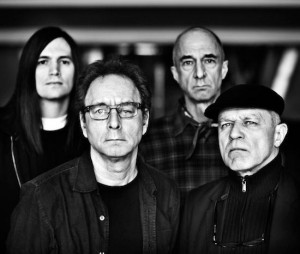 Widely celebrated for the best and most varied three-year run in rock history (’77-9), Wire return to form, and to Brighton, with an eleventh album.

Wire are generally lauded as the ultimate art-punk band. Emerging around the rise of London punk in ’76, they became touchstones (as well as counterpoints) of not only punk, but new wave, post-punk and art rock with the trio of albums from the raw Pink Flag in ’77 to ’79’s post-punk masterpiece 154.

Wildly different from one another, the albums spanned bare bones thrashers – “Field Day for the Sundays” (spanning thirty seconds) – through to meandering, progressive slow-burners like the seven minutes of “A Touching Display” from 154. They mastered power chord progressions through to synth lines and creeping dynamics as expertly as lead singer/guitarist Colin Newman did punk snarl and soft vanilla tones. And they paved the way for decades of bands, from R.E.M. and My Bloody Valentine – who both covered Wire songs – to the Minutemen, Sonic Youth and even the Manic Street Preachers.

But after this legendary run, their career became problematic, fractured and sporadic. A series of live albums followed the trio. The band broke up in 1980 and despite peaking popularity with their late eighties reform, they refused to play their earlier work (at one point they hired a cover band as a support act so they could get away with concentrating on new material in their live set). After another breakup for the better part of the nineties and nine more studio albums, this year sees their eleventh record, which in fact is closer to their fourth – following up the band’s legendary trio with reworked and previously unreleased versions of their earlier material.

With promising young talent Matt Simms (thirty years younger than the rest of the band) taking the role of guitarist/texturalist, Wire are back to rock as hard – and soft – as they ever did. Which means that Komedia’s audience have the opportunity to witness something that a decade’s worth of fans thirty years ago were denied – Wire playing the music that made them legends.

Head to komedia.co.uk for more info and to buy tickets, also available from Resident Records.
Head to the band’s website at www.pinkflag.com