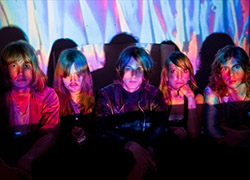 Psych meets krautrock meets Brighton’s newest music venue, for one of the last must-see gigs of the season and a ticket price worth half a pocket full of change.

Brighton’s favourite Toy have been creeping across the ‘unanimously praised’ cross-section of the rock press for some years now, a slow but carefully consistent body of work emerging perhaps as a necessary strategy to make everyone forget their roots in the anachronistic indie joke that was Joleen and the Jing Jang Jong.

A scattering of EPs and last year’s eponymous debut full-length have long-since buried that uncomfortable industry springboard under about two metres of canny, measuredly unfolding jams. But Toy are clearly not done, and their return to our city by the sea also marks the release of second full-length, “Joining The Dots”.

Erring less on the krautrock-influenced side of their earlier releases (which plods along at a simultaneously warm and mechanical pace), their more recent work shows their kinship with the contemporary trend towards psychedelia. But all the while, they have retained an idiosyncratic blend of influences, un-categorisable under the Tame Impala / Temples revivalist banner.

Instead, their music churns along with a visceral tug, guitars soaring to dizzy heights even as their rhythm section crawls along a steady post-punk groove. Infectious head music with a juddering tail end directed at the body.

Joining them at Brighton’s newest venue – Bermuda Triangle – a stylish revamping of Digital’s Room 2 – are Chichester three-piece Traams. Carrying a similarly chugging kraut undertow, Traams pepper their own driving rhythms less with psych than a sterner post-punk edge, guided by Stu Hopkins’ sharper guitar stabs and nasal vocal that seems to recall most of the late-70’s paradoxically indifferent indignation.

By a logical step, marking the sonic trend from the ground up, the evening’s first act, Brighton’s Theo Verney, sits at gritty floor level. His raw garage rock stings with lo-fi textures, sharpening the ears for the night’s inevitably billowing finale.

Tickets are sold out but this is one show you’ll want to hunt down re-sellers and tackle touts to the ground for.
£5 advance, SOLD OUT, 7pm, Aged 14+.

Head to bermudatriangleclub.co.uk for more info and stream Toy’s new album at The Guardian website.