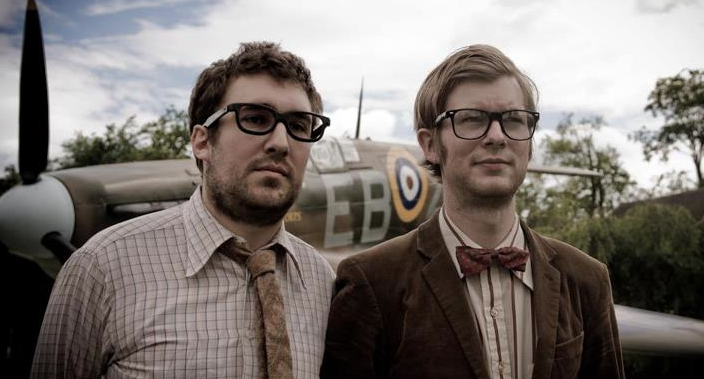 Preview: The Christmas Takeover with Public Service Broadcasting and more …

Vintage audiovisual scavengers Public Service Broadcasting head up a nine hour extravaganza of music and sideshow entertainment at den of irony The Haunt, and all in suitably non-festive festivity.

Public Service Broadcasting are an extremely appropriate booking for this Christmas takeover from the This Is Now Agency – appropriate, that is, in their inappropriate non-festiveness. They deal less in jolly hearth-side singalong, more in instrumental cut-up krautrock, appropriating vintage propaganda to teach of the ills of early 20th century mind control. Top of everyone’s christmas list, I know. But then again, the paradox of Public Service Broadcasting has always been trying to pick out the critique in their often seemingly affectionate use of public information films. You don’t have to approach their music with a kind of Auschwitz “lest we forget” mindset, and if you did then you might be taken aback by just how damned pleasant the whole affair is.

A vintage telly set – its images projected across the wall behind the band – provides the focus of a stage otherwise only taken up by messrs Mr. B, J. Willgoose Esq. and Wrigglesworth. Each are suitably tweeded up to the eyeballs and remain entirely silent – because it’s the public service broadcasts that do the talking. And then you have to work a bit to pick out the sinister notes of British totalitarianism, because the veneer is a stirring kind of Keep Calm and Carry On nostalgia. The painting of early colour television as superbly modern in “ROYGBIV” is cuter in its old-timeyness than menacing in its obvious “CONSUME!”-type message. And PSB’s most famous “Spitfire” trundles along at such a rousing pace (thanks to Wrigglesworth’s pounding motorik drums and Willgoose’s tearing guitar lickery) that it’s actually hard to see through the fact that these British propaganda films retain their power even now to make you feel something like “gosh, aren’t our fighters brave”. It’s an unsettling experience, if only in the fact that it’s actually not unsettling at all – rather a jolly good bit of fun, eh what?

Otherwise, the irony of PSB is relatively absent amongst a line up of labelmates Beans on Toast, Too Many T’s and more. Between them they’re self professed “English drunk folk singers”, gentleman rhymers and purveyors of fundamentally Brighton-ish party music, sporting a pair of album launches and a barrel full of good times. And to fill out proceedings is a spread of comedy, choice cuts from resident label DJs and Badger Bingo – whatever the hell that is.

All in all, a bally good knees up. Don’t forget your ironic Christmas hat.

Tags: Beans on Toast, Public Service Broadcasting, The Christmas Takeover, The Haunt, This Is Now Agency, Too Many T's