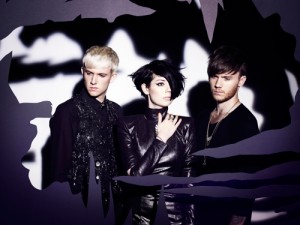 If you love punctuation-ridden band names and one word titles as much as you do mysterious, trancey post-rave pop, then you’ll love No Ceremony///.
It’s no new trick to opt for secrecy when it comes to marketing your up and coming blog-ready band (see Burial, SBTRKT), but No Ceremony/// make no-frills, ‘about the music’ sincerity their primary focus – clue’s in the name. When they emerged two years ago with knockout numbers ‘HURTLOVE’ and ‘HEARTBREAKER’, they caused ripples across the blogosphere with their moody dance-tinged pop – which is impressive, considering back then the blogosphere was almost entirely composed of posts about moody dance tinged-pop. No one knew if they were a one-man producer deal or an alias for a secretly celebrated name. To everyone’s mild surprise they turn out to be a three-piece made out of a producer double-act and singer, who is definitely (probably) called Kelly.
Identities disclosed, it’s safe to say there’s still a lot worth turning up to a No Ceremony/// concert for. Their roster now includes the twisted club-ballad ‘WEAREME’ (a piano riff-led grower that sounds like 90s rave with the speed set to ‘sullen’) and ‘FEELSOLOW’, that explores similar ‘weeping in the corner of Digital’ territory, only with more trancey synth. You can now get a mostly-concealed set of mugshots of the band amongst the double-exposed climax of their latest music video, and with an album on the way (released September 2nd), more subdued tunes will follow. Don your limpest rave-suits, smudge that mascara and slouch rhythmically down to The Hope for a post-rave grump-fest to end all post-rave grump-fests – you won’t be crying about the ticket price, for one.
£7.50 adv, 18+, 8pm.
Head to seetickets.com to buy tickets, also available from Resident Records.
Words by Callum McLean
http://www.youtube.com/watch?v=NtyyO4NCqP4