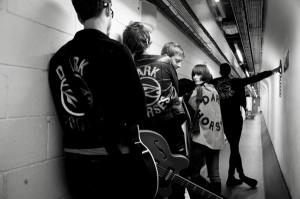 Hailing from our own sun-splashed coast, it’s a long-awaited return for the band, having risen up from the formidable underbelly of Brighton pier where the band allegedly formed. Tough to classify into one genre, think the temper of a young Siouxsie Sioux, with a touch of Bauhaus and a hint of Suicide’s early electronic drone.
Mesmerising and emotive lyrics and bass hooks that hit you in your heart and a distinctive and melancholy vocal from front-woman Lisa Elle – Dark Horses parade on stage with two noticeable and seemingly contradictory styles. One of an unkempt leather-bound 80s metal band, adorned in Dark Horses jackets. The other, a gentle and vulnerable Elle, well groomed and dressed head to toe in charcoal black, mascara smudged across her face beneath thick black rimmed sunglasses. Elle serves as a cruel siren to her adoring fans – expect a callous and sobering performance with a scrap of kindness.
£9, 8pm.
darkhorsesmusic.com
facebook.com/darkhorsesmusic
Words by Amy Louise Banks