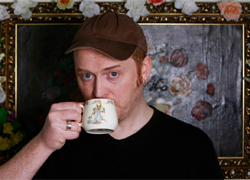 Longstanding member of Fife folkies the Fence collective, James Yorkston – dubbed “the songwriter of his generation” by John Peel – will grace the Brighton Ballroom’s cabaret crowd on Sunday with his delicate guitar strokes and wordy purr.
Similarly to labelmate King Creosote, Yorkston has long proven an integral part of both his native Fence collective and Domino records, encapsulating perfectly Domino’s now staple blend of post punk savviness and trad-folk romanticism. Initially member of a punk band, Yorkston is no stranger to delving out of the folk palette, having collaborated with members of the Cinematic Orchestra and Four Tet’s Kieran Hebden in the past. But he’s also known to quiver ballads to Scottish pasture in celtic syntax, and his tremulous lullaby finds fans predominately in folk circles, where he is a household name.
Four years since the release of his last album, Yorkston’s recent offering I Was A Cat From A Book brings his elaborate wordsmith credentials to unseen heights, dizzying many critics to apprehension with its opaque showers of tangled lyrics. But with an enviable back catalogue and a dedicated cult following, as well as a talent for onstage hushed gentility, his Brighton Ballroom show promises to tantalise in wispy doses of poeticism and lulled dynamics. As mythical as the grizzled coasts of his lyrical geography, this Scottish legend is not to be missed.
£12.50 + BF, 20:30 after Proud Cabaret dinner.
For more information visit www.brightoncabaret.com or www.meltingvinyl.co.uk