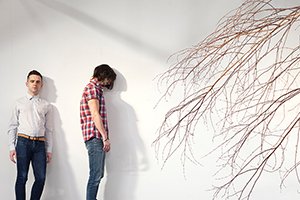 ‘BLUE’ is the latest taste of the follow-up to their critically acclaimed debut, ‘TODAY I REALISED I COULD GO HOME BACKWARDS’, which drew praise from all quarters and saw the band nominated for The Choice Music Prize for Irish Album of the Year. In the past few years they’ve enjoyed radio support from the likes of BBC Radio 6, XFM and Amazing Radio, while they’ve toured internationally with the The Maccabees, Villagers and Frightened Rabbit.
BLUE was premiered on BBC Radio 1 by Phil Taggart and had the following to say, “This is just perfect guitar pop right here. The singer is wailing like a banshee and the drums are as loud as a jet engine. They’re one of those bands that have constantly just gone under radar and it gets really really annoying!”
Make sure to check out the new single which will be released on the 12th May from forthcoming album “Think Nothing”.
wecutcorners.net