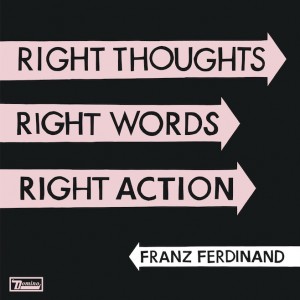 Everyone’s favourite post-punk revivalists revive their own early brand of angular disco rock, applying a fresh coat of chorus-centric pop – but will it stick?
In the decade since their zeitgeist-defining debut and the enormous success of ‘Take Me Out’, Franz Ferdinand’s output has been cautiously sporadic, and more recently somewhat inconsistent in quality. Though the follow up to 2004’s Franz Ferdinand, You Could Have It So Much Better was propped up by monstrously catchy singles, they distracted from some iffy numbers elsewhere, and nothing since that record has impacted with the bombast of ‘Do You Want To’. Their third album Tonight: Franz Ferdinand promised ambitious collaborations with dance and pop producers, but early efforts collapsed due to artistic differences – the result was decidedly underfed with choruses, unless you count that of “Ulysses”, whose intriguing mix of come-down jitteriness and hysterical crescendos was unmatched on an otherwise tentative and unconvincing edge away from mainstream accessibility.
So when Alex Kapranos mutters on “Goodbye Lovers And Friends”, “Don’t play pop music, you know I hate pop music”, you’d be forgiven for worrying that their fourth Right Thoughts, Right Words, Right Action might also err on the chorus-less side of alt-pop. Luckily though, it’s laced with Kapranos’ trademark irony – Franz Ferdinand are here unashamedly rolling with the pop punches, from the familiar toe-tapping riffs of opener “Right Action” to the bold, pared back infectiousness of “Bullet”.
But if it’s not shame that pervades this set of tunes, there nevertheless remains a slight lack of confidence at both its sunnier and its more cerebral ends. When he delivers the hooks of “Love Illumination” and “Stand On The Horizon”, Kapranos’ voice seems to shiver somewhat away from the bolder tones on Franz Ferdinand’s early singles. And when the album delves into its wriest corners lyrically, they seem more opaque than knowing; see references to “Beta Pi” mid-chorus of “Fresh Strawberries” and the break-up metaphors on “Goodbye Lovers And Friends” and “Universe Expanded” that ambiguously but unconvincingly gesture at FF’s audience (“But this really is the end” abruptly closes the album). Perhaps though, this doesn’t really matter. “Universe Expanded” resonates cleverly as a bona fide lament on fading relationships, and “Goodbye Lovers” hits home however you interpret it.
The rest of the album by and large takes less risks, for better and for worse, its more familiar moments working the most seamlessly – see the overlapping choruses and the pent-up funk of classic Franz dual guitar structures on “Right Action” and “Stand On The Horizon”. Only “Evil Eye”, with its sinister yet single-worthy plod, as well as odd instrumental touches of sax, accordion and keys, gesture at completely new territory.
Overall, Right Thoughts might not be stuffed with the sharp hits of their debut, but it returns effectively to formula, if not completely to form.
6/10, out now, Callum McLean
Head to franzferdinand.com for more information and to buy the album.