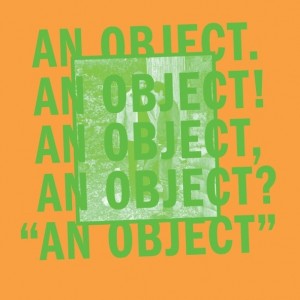 The fourth album from D-I-Y LA punk rockers No Age is anything but “An object”. A band once full of energy and experimentation would have been better off with their previous release’s name “Everything In Between” for this lacklustre and perplexing effort. As another of the bands artistic ‘Dream-punk’ endeavours, the lo-fi guitars, chanted vocals and frantic drumbeats are broken down and spared for more minimal permutations.
Sticking to their entity, Dean Allen Spunt and Randy Randall still hone their D-I-Y style and self-expression, manufacturing and marketing “An Object” themselves. As a mutual enterprise with record label Sub Pop, No Age have designed and assembled all 10,000 CD and vinyl copies of their release, even hand making the covers, licking the stamps and sending them out. With all this effort put in, it’s a shame it couldn’t have gone into the music itself.
Still refining their craft, the band have encountered a change of direction, leaving their noisy, sporadic instrumentation behind and opting for an imbalance of pace and volume heading more towards potential rock songs – just without the dynamism of their previous work. “C’mum Stimmung” is the liveliest and most traditionally No Age, with the usual reverb-heavy mix of guitars and non-conventional percussion creating ear bursting abrasiveness in 2 minutes. “An Impression” is a more melancholic listen with unexpected violins softening the jagged vocals and guitars.
“An Object” is supposedly a protest album, full of anti-corporatism and angst, but only is this displayed through the direct lyrics. Listening to it straight through can be a difficult and tiring ordeal for even longstanding fans. Following No Age’s trademark style, the album is still wonderfully imperfect and raw but signifying less of the ‘punk-dream’ and more of a band who may have lost their way.
5/10, Out Now, Amber Ainsworth
Follow No Age at noagela.blogspot.co.uk and listen at soundcloud.com/subpop