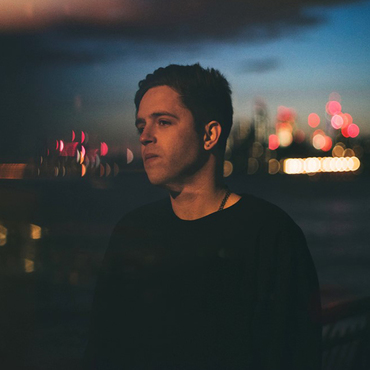 It’s often been said that some of the best art follows pain, and so it is with Yorkshire singer songwriter Leftwich’s 10-track release “To Carry A Whale”….

Following a stint in rehab and a period of great development in his life back in 2018, a completely sober Benjamin has discovered a new love for music, and for life.

Speaking of the new album, Leftwich said: “It’s an observation on what it’s like to be a sober alcoholic addict a couple of years in”.

“A whale is heavy to carry. It’s gonna hurt you to carry it. But it’s also beautiful, and it’s a miracle to be able to carry all that at all.”

“The title comes directly from that” explained Leftwich …”as it’s what it’s like to live as a clean and sober alcoholic, which is a beautiful thing to be in that space, but you are carrying that thing which is really heavy, while being something to take care of”.

His first signing to Dirty Hit Records, home of The 1975, Wolf Alice and Beabadoobee, this is his 4th album, produced by Sam Duckworth (Get Cape, Wear Cape, Fly) and Eg White (Adele, Sam Smith) and it sees the artist showcase his creative best.

“I’m really pleased to be where I’m at” the artist goes on, “…and my way is not the only way, but it’s the right thing to do for me personally”.

Discussing the album and the process this time, Leftwich explained:  “The biggest difference for me this time around is I have that extra 10% of almost scientific focus in the writing process, all those things I let slide because I couldn’t be arsed or didn’t care as much as I should. At that time, If I was in a conversation, all I wanted was for it to end so I could go drink or use by myself, so that extra 10%, 20% or even 50% focus, all those twists and turns in the lyrics and not letting anything get across the line if it wasn’t honest in terms of feel or content I might have let slide previously just didn’t happen.”

It’ll inevitably enhance his performance, which is a very exciting prospect for his already huge fan-base up and down the country. “I have the ability to go in hard on it now, too.” – Leftwich enthuses. “This is important, as I want to say things accurately and I’m awake enough to accept that just because I have a song in the bag that’s poppy and a good radio song, it doesn’t mean anything if it doesn’t fit the theme of To Carry A Whale.”

Elaborating more on his journey Benjamin reveals “When I was in treatment I was really worried if I could ever write songs sober, but I feel more in love with it, more awake to it and more hungry for it than ever before. Maybe I’m getting addicted to songwriting, but it’s much better than what I was addicted to.”

Set to play at Komedia February 1st as part of a 26-date tour of the UK spanning February and March, Leftwich concludes: “I’m really, really excited to get back out there for the tour in February”.

”It’ll be a really intense setlist, with some of the deepest cuts from the old albums, while dropping in new ones like “Cherry In Tacoma”, “Tired In Niagara” and “Full Full Colour”. I think putting them in the set at the right moment will be beautiful.”

We look forward to the show – find out more and link to get your tickets at the event page in our ‘It’s On’ guide…..

For tickets and more information: benjaminfrancisleftwich.com

23-Feb-22 Manchester Band On The Wall