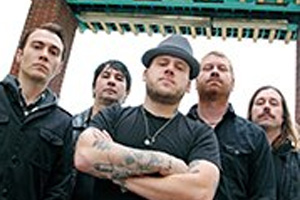 Tonight marks the first date of an extensive UK tour for LA’s The Bronx in support of their newly released album, “Bronx IV”. It’s their first studio album in five years, not counting the bands previous two releases in the form of Mariachi El Bronx, their Mexican folk alter egos. The Bronx return to the world of rock music stronger than ever, and with that they return to Brighton’s Concorde 2.
It is Irish three-piece Axis Of who have the task of waking up a sleepy Concorde 2 tonight, and fortunately this doesn’t seem to be a problem for them. Their quirky punk rock sound gets more than a few heads nodding and their efforts are deservingly rewarded by an impressive crowd sing-along during their final song.
Next up is Single Mothers from Canada, a band who are quick to raise the bar in terms of high-energy performances tonight. Their mixture of gritty but fun melodic hardcore causes a stir, and although vocalist Andrew Thomson’s unique, and almost sarcastic vocal style might not appeal to everyone, there’s no denying that they have won over some new fans.
Concorde 2 is buzzing by the time The Bronx take to the stage, and what follows is less of a gig and more of a party, to which The Bronx’s hardcore rock and roll tunes provide the perfect soundtrack. New songs like “Youth Wasted” and “Along For The Ride” fit in seamlessly alongside older material, not only proving to be hits with the crowd, but also demonstrating the way in which the band have matured throughout their ten year career. The sound of the venue is impressive; it suits the bands style perfectly, with nothing getting lost in the mix even during the loudest of sing-alongs. As the night goes on, it becomes clear that The Bronx are veterans when it comes to delivering a brilliant live performance, the set only slowing down to enable frontman Matt Caughthran to make his way into the centre of the crowd for a classic rendition of “Knifeman”. It is a perfect example of the band doing what they do best, and after set highlight “History’s Stranglers” comes to a close, the crowd leave slightly exhausted, but very happy indeed.
www.thebronxxx.com
www.singlemothersgang.com
www.facebook.com/Axisof