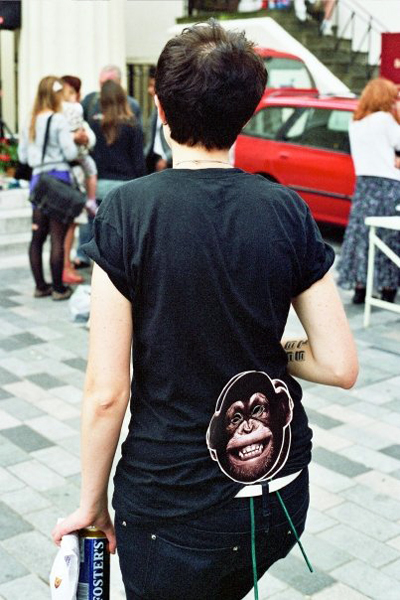 Six days until D-Day (Christmas) and therefore Brighton city centre should be prepared for an invasion of the Christmas shopper kind. But as if to save our seaside city from the chaotic crowds, slippery ice was summoned to cover every pavement block in The Lanes and thus making shopping very hard work, not to mention hazardous.
However, the treacherous and freezing weather conditions didn’t stop the merry musical fundraisers behind Brighton’s Big Monkey Man Street Gig. With acts from across the Brighton indie/pop circuit, this fundraiser oozed a country-folk charm and was sure to attract the surviving shoppers that were slipping and sliding their way past the Unitarian Church.

Braving the cold were the ebullient pair, otherwise known as The Croydon Facelifts, who brought a quirky acoustic set to the pillared stairs. They were warmly welcomed as their whistled tunes and jokes filled the frosty air. I was numb and dazed, until Gentleman Starkey appeared, an idyllic musical quartet with a harrowing vocalist who certainly heated things up. They provided numerous throaty and thriving songs, which created electricity that even got a few passers-by jiving to the thundering riffs that echoed off the cobbles.  The charity table rescued supporters with hot drinks and finally a credible crowd collected for the remaining acts Amity, Gloria Cycles, Sweet Sweet Lies and The Laylanas who supplied a festive afternoon and an admirable fundraiser.