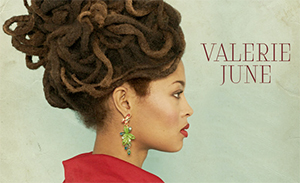 Lit up like a Christmas tree, Valerie June stepped towards the edge of the stage at the Haunt; her fragile figure hung limply above the crowd as she bent forward to pick up her guitar. The stage was bound together with brightly coloured fairy lights, flickering through the hazy smoke like fireflies in June. She opened her mouth and let out a tremendous chorus of rich, sweet-sounding Tennessee blues which left her audience dumbfounded by the astonishingly powerful voice that emerged from such a small, bird like frame. Her songs echoed soulful stories of the deep south, staggering between soothingly melodic and deafeningly loud. Plucking a carefully hung banjo from the mic stand she lovingly whispered “this baby is the sweetest” and smiled as she fired up another skilfully composed folk song. The singer powerfully punched out a fistful of tracks from her debut album “Pushin’ Against a Stone” which was released in the UK earlier this year, featuring the singles “You Can’t Be Told” and “Workin’ Woman Blues”. She has only one more stop on her tour before making her way back to the states after announcing Sharon Jones has requested Valerie open her 2014 US Tour. The singer gave a heartfelt performance, admirably following the thunderously applauded Ben Miller Band, which had most of the audience barking out lyrics at the top of their lungs and thrusting pints in the air. If you hadn’t previously witnessed a pack of impressively bearded men playing the washboard and the electric spoon, you can now tick that off the bucket list.
Words by Amy Louise Banks
Follow her on facebook.com/valeriejunemusic