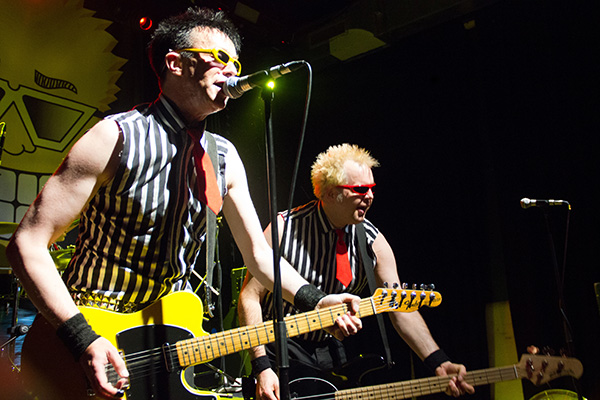 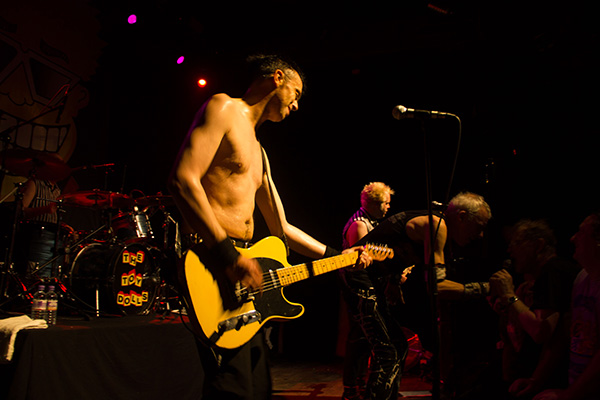 ‘Am I getting too old for this?’ asks Toy Dolls’ frontman Olga in a rare moment of still self-reflection during a spit, sweat and power chord fuelled set.

After 35 years in the business, the vintage punk rock trio still give it all they’ve got: colour coded down to their red, yellow and blue sunglasses, the boys quickly stripped their school-boy style jackets down to sleeveless black and white striped shirts. Eventually Olga (real name Michael Algar) stripped that off too (though he briefly showed off a pretty fetching chest wig).

Toy Dolls spent the night spitting out punked up sing-a-long anthems like UK number 4 hit “Nellie the Elephant” (that hit the UK singles charts in 1983) and “Yul Brynner was a Skinhead” to almost balletic runs and acrobatic jumps. The crowd – a generous portion of which was made up of hefty first generation punks of the 80s, which made for a heavyweight, enthusiastic and somewhat perilous mosh pit – was unceremoniously showered with paper confetti and streamers, with one confetti canon fired by Olga from the top of a giant inflatable champagne bottle.
Set highlights included an electric violin solo from drummer ‘The Amazing Mr. Duncan’ Redmonds, hectic covers of “Wipeout” and Beethoven’s “Toccata in Dm” both with the idiosyncratic Toy Dolls twist, and an on stage collaboration with ex-Adverts vocalist TV Smith, performing a brilliant rendition of 1977 top 20 hit “Gary Gilmore’s Eyes.”

The Toy Dolls formed in Sunderland in 1979, putting a madcap twist on the genuine old punk aesthetic: less angry and political: more manic and fun loving. Anarchic and irreverent, Toy Dolls are all about high volume and high energy but they’re certainly not highbrow. Their timeless sound, combined with their non-stop energy and frenetic, fast paced showmanship just goes to show that they’ve got a fair few years of punk rocking left in them yet.