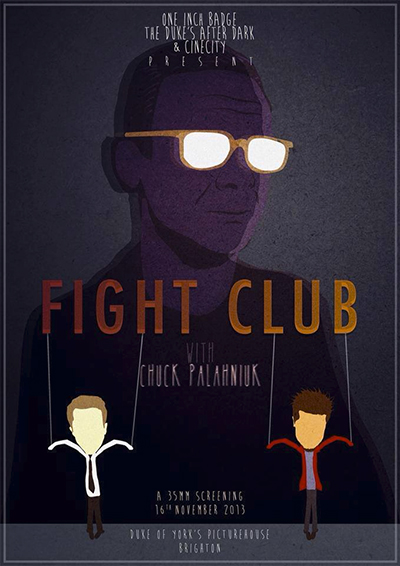 “The World is full of many beautiful, inspiring and sentimental stories, but tonight is not one of them”. Chuck Palahniuk uttered a dry laugh and took a large swig of red wine from the glass balanced in his hand. The audience bowed forward in their seats, ears pricked eagerly hoping for Chuck to set loose an eternity of literary secrets.

Greeted by a queue that led half way out of the doors at the Picturehouse, we scrambled across seats and clung on to our popcorn in awe of this almighty author stood a mere few feet away. Following an intimate screening of the phenomenal Fight Club, the room grew silent as Palahniuk begun to speak of its long awaited sequel which is scheduled to be released as a series of graphic novels.

The sequel propels the suggestion of Tyler Durden’s psychosis forming an ‘unending, parasitic idea that is looking for a whole new generation of humans to feed upon’. He spoke fondly of his disturbingly darkened sense of humour, strewn across many of his novels and professed he’d “rather be fooled into laughing at something terrible – we laugh because we’re going to live another day”. Audience members were then invited to sit through a deliciously unnerving rendition of “Romance” followed by discussions of his latest book “Doom”, released this November. “Every garbage thing I was taught not to do, I do next year” exclaimed Chuck as he went on to speak briefly of his next release, hailing it as a “crime against humanity”.

Palahniuk appeared strikingly reserved, but with his humour predictably sharp and despite everyone’s legs being numb from a good four hours spent crouching on uncomfortable chairs, sat opposite a near genius in literature, it was unquestionably money well spent.