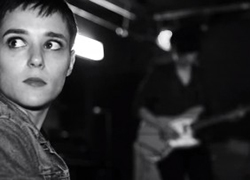 Proclaimed as the probable, spurious offspring of Siouxsie Sioux, gravelly all girl post-punk band Savages broke bones with their surly, self-assured drone-like punk rock at the Concorde 2 this November. The venue was near to tearing at the seams as devotees stood pressed disturbingly close against one another, the sweat dripping off their faces as they clambered onto metal tables and clung to the sides of walls in the hope of at least a half decent view of the stage.
Vocalist Jehnny Beth ruled the stage with her habitual authoritative stance, hungrily howling at the top of her lungs and echoing the likes of former female punk vocalist Poly Styrene, whilst bestowing a wrathful glare to audience members whose arms relentlessly grabbed at her feet and submitted to her woeful wailings like loyal subjects. Drummer Fay Milton’s arms thrashed and floundered at the back of the stage, beating her drums within an inch of their life whilst the audience obediently swayed in time to the rhythmic twanging of guitarist Gemma Thompson. With a worth-the-wait live debut of “Silence Yourself” and an eerily exquisite cover of Suicide’s “Dream Baby Dream”, Savages proved that despite their reputation for shin kicking choruses and hefty guitar riffs, underneath their steely façade they almost had the ability to be sweet. Possibly.
Words by Amy Louise Banks
Follow the band at savagesband.com
concorde2.co.uk