Upon attending the venue tonight it’s clear something quite special is anticipated. After an incredibly heartfelt and sincere performance by David Ford, a trickle of musicians take to the stage bearing violins and led by Lucy Claire, who scored and goes on to conduct the mini-orchestra, The Shadow Enigma. Shortly after the group take their seats, Nordic Giants take to the stage and before the audience even has a chance to simmer down, an incredibly powerful bass note starts off what then becomes an hour long wall of noise. 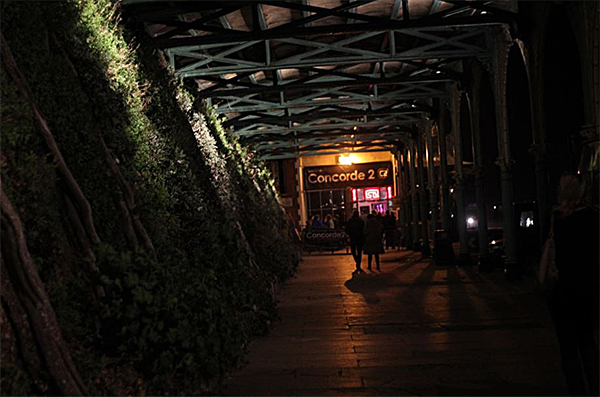 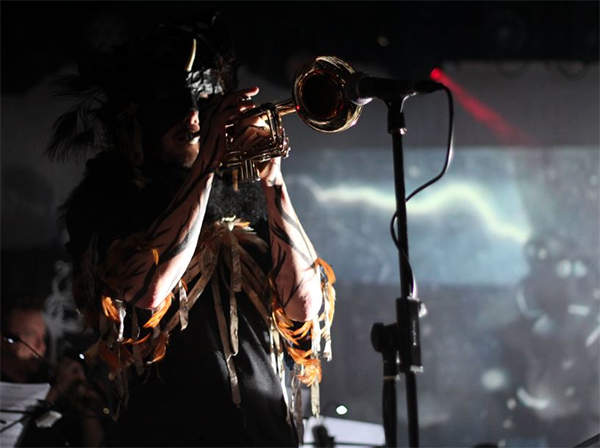 Incredibly haunting in their style, donned in vines and feathers and what looks like a real heart and ribcage, the two eerily anonymous figures manage to entrance the audience into complete stillness and awe. The band put on a show, rather than a gig, where no one off the stage aspired to do anything but witness. The heady mixture of pianos, trumpets, violins, drums and electric guitar played with a violin bow, alongside the projection of a few female vocals and an excerpt from The Dictator, made for an exciting and very beautiful resonating timbre.
A defining aspect of the show was that the performers played alongside a background of award-winning short films. Some shocking, some beautiful and some plainly strange, Nordic Giants managed to encapsulate the feelings and flow of each piece exactly, in moving and surreal ways.
Upon visiting their Facebook page post-gig, it’s clear to see that it had quite an affect, with an array of audience members voicing their enjoyment and regarding the band as ‘one of the best in the country’.
Although this was the climatic finale of their recent UK tour, promoting their new double EP, ‘Build Seas, Dismantle Suns’, the Brighton-based duo are sure to hit our streets with equally amazing follow-up performances in the future.
Keep up to date with Nordic Giants at Nordicgiants.co.uk
View upcoming gigs at Concorde2 at Concorde2.co.uk
Photography and words by Shira Rossiter