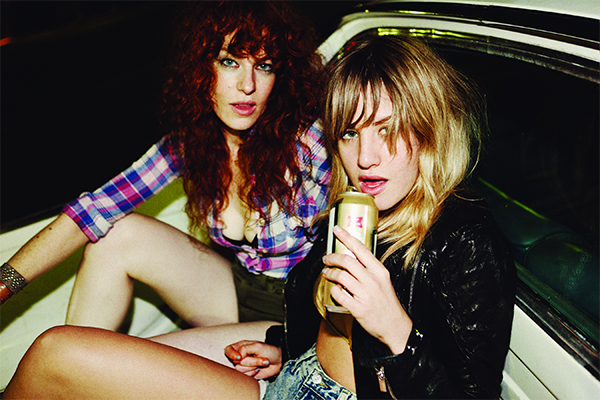 Deap Vally aren’t a band afraid to out do their audience with energy, attitude and unsympathetic arrogance and tonight they more than succeed. Revitalising their debut album “Sistrionix” for one last lap of the UK before their chaotic year comes to a close, Lindsey Troy and Julie Edwards bring their own feminist agenda to a sold out Concorde 2.
The aggressive glam rock duo sound like the female Black Keys, thrown in with some Courtney Love but are a lot better looking. Tonight’s audience sees everyone from adoring typical fem-rock fans to couples in their 50’s seeking some real rock’n’roll, come to marvel at their impressive blues-rock magic. Strutting on stage in draw-dropping stage outfits, Deap Vally open with “Raw Material”, hinting at a night of visceral vocals, distorted riffs and pedalling drums.
With little movement from the crowd so far, “Bad for my body” sees the audience suddenly break into a mini moshpit of raucous head banging and fist clenching which continues throughout their enthralling set. Thriving from the crowd reaction and forever playing the amorous front woman, guitarist Lindsey Troy takes the plunge during “Walk of Shame” for a brief crowd surf, met with rapturous cheers and raised hands.
With the fierce force of their instruments and sensuous femininity, Deap Vally bring their compelling set to a close with fan favourite and hit single “End of the world”. With sweat dripping from every nook of the venue, the LA ladies were then beckoned back to the stage for one last song, resulting in a killer rendition of Screamin’ Jay Hawkins “I put a spell on you”. With that, the audience implode and another empowering Deap Vally live show goes down in ‘females doing rock’n’roll well’ history.
9/10
Words by Amber Ainsworth
Follow the band at deapvally.com
concorde2.co.uk