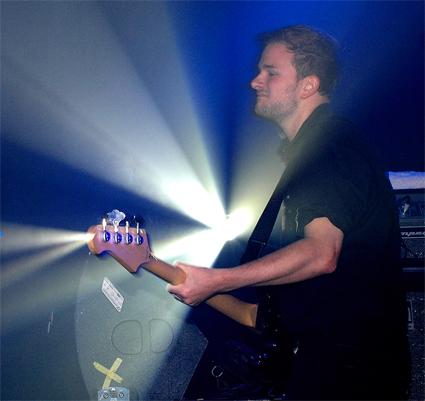 Much hyped in the music press as indie’s next great white hopes (geddit?), West London 3-piece White Lies have a lot to live up to and they do not disappoint. As they performed amidst moody spotlights, all cut-glass cheekbones and billowing dry ice around their black apparel, they had the insouciant demeanour of a band that have been doing this for years, although their debut gig was only this February. This confidence and maturity feeds into their dense, meaty songs full of angst – dark and brooding tales of love, loss, murder and revenge. Although bleak in subject matter, the band elevates these elegies into exquisite power-pop ballads undercut with a dramatic rock soundscape.

Singer Harry McVeigh shows his effortless vocal prowess and rich tonality on audacious debut single ‘Unfinished Business’, an elegant murder ballad (written by bassist Charles Cave) about death, religion and redemption. Its effusive keyboards, crashing chords and atmospheric lyrics create an emotionally charged lament to a doomed relationship. ‘You got blood on your hands, and I know it’s mine’, McVeigh fervently bellows, before piling on layer upon layer of skyscraping hooks and galloping guitar bursts. This is followed by ‘From the Stars’, a lushly orchestrated requiem full of heartfelt intensity and quiet desperation about a dead celebrity who had it all but only felt emptiness.
Comparisons to other bands are inevitable – their sound seems to have mined the gothic existentialism of Joy Division together with the epic grandeur and anthemic indie-rock of Teardrop Explodes (McVeigh’s voice is uncannily like Julian Cope’s). But I see more of Interpol and Secret Machines in their sound than a re-hashed version of the overblown stadium rock of the eighties. Yet these comparisons are soon rendered meaningless when confronted with their insistent melodic songs that are as accomplished and polished as they are radio-friendly and catchy.
There were a couple of mid-set plodders, but this was more than counterbalanced by their exhilarating closer and recent single ‘Death’ – a jaunty ditty about dying and mortal fear, which had the capacity crowd smiling and waving in rapture, like a group of evangelists raising their hands to heaven or a herd of Nietzshean yea-sayers affirming the void. McVeigh’s diametric dictum that, ‘Everything has got to be love or death’ clearly found a touchstone with this ecstatic crowd, who bounced along to the powerful torrent of guitar jags and swirling synths over McVeigh’s soaring vocals, reminiscent of The Killers at their best.
In their short 40-minute set, it was clear that White Lies’ literate gloom-rock justifies the hype surrounding them. Whether they will fulfil their promise as saviours of indie music and become the next great British headline act, I don’t know. One thing is for sure: there is certainly life after Death.
Words by David Gallienne
Photographs by David Tatnell