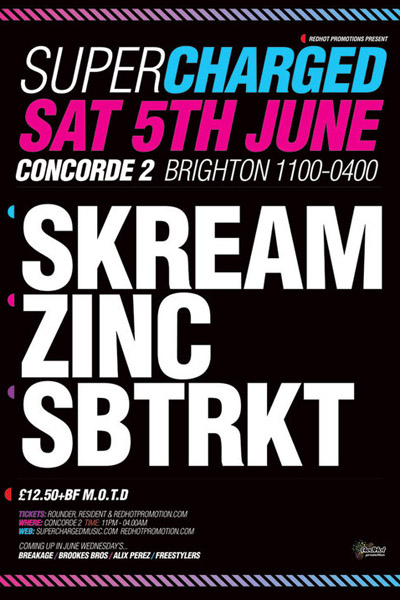 The sub-genres that drum ‘n’ bass threw out onto dance floors and squat parties a couple of years ago are beginning to converge like never before. Tonight’s Supercharged line-up is testament to that, a diverse and upbeat crowd snaking its way through the Concorde 2’s doors well before midnight.
The elusive SBTRKT kicks things off in unabashed hedonistic style. Emerging onstage with his Aborigine mask and matted locks obscuring all features, the passion and time that this DJ puts into finding the latest beats and melding them into his messed up electronica-influenced world soon becomes very apparent to all in attendance. Throwing Basement Jaxx, Little Dragon and M.I.A remixes into the fold, soon the room is swaying gloriously to the eclectic sounds, the sum of all its parts, an almost psychedelic blend of processed noise. No wonder Annie Mac is raving about him. Spellbinding from start to finish!
The rather less elusive, longstanding underground dance hero Zinc has, admittedly, a tall act to follow. His pumped-up, old-skool take on the drum ‘n’ bass/jungle sound is a little lost on those still grooving to his predecessor. Granted, the room loses itself to the sounds of “Wile Out”, featuring the vocal talents of Ms. Dynamite. It isn’t too long however until things start to slow down, for the bass to begin rumbling once again, an introduction to the main event.
The main event in question serves as one quarter of the so-called “big four” of dubstep. Whereas usually one can count on drop after drop from this guy, tonight Skream follows a decidedly more fast-paced and straightforward direction, perhaps paying homage to the music that inspired him in the first place, perhaps in keeping with the party vibe of summer. As his music gains more widespread notoriety, the darker early material is being mixed with an air of melody, evident on reworkings of La Roux and Klaxons tracks. In the end it serves as a fitting way to round out a night that celebrates a refreshing new direction for an at times stagnant genre.
Words by Oli Robertson
myspace.com/skreamuk