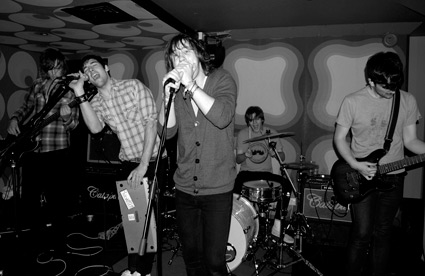 It’s a Friday night and I’m in The Ocean Rooms wondering who thought the psychedelic sixties wallpaper was a good idea when Rob the Rich take to the stage, mercifully drawing my eye as well as my ear.

This is a band I knew about before hearing them (partly through word of mouth and partly through seeing their somewhat indecipherable logo plastered around the city) and after a few listens on their Myspace I found myself with unusually high expectations of these newcomers to the Brighton indie scene.
After launching into their first number ‘Dirt’ I could tell they were in no mood to disappoint, effortlessly hooking the crowd with this energetic tale of lust and frustration. Punctuated by choppy guitars, clever lyrics and a catchy pop sensibility it has all the hallmarks of a modern indie hit. A bit of banter with the crowd and the band were soon into the second song ‘Different Stories’. Reminiscent of acts like The Thirst, this number bristled with energy and aggression and demonstrated the band’s technical skill alongside their ability to make an audience dance, a lot.
Tracks like the slower, jauntier ‘Bunkbeds’ highlighted a different element of the band’s charm and a few technical issues later we were treated to some new songs. The first of which, ‘Forbes’, was exceptional: fluid, aggressive, hooky and quintessentially British, I’m rarely impressed so much by a song on the first listen. The second number, ‘Jonathan’s Shoes’, was a little harder to permeate: equally as tight but perhaps lacking the same impossibly familiar melodies.
‘Art Project’, the final song of the set, was met by a roar of recognition from the crowd. It was my personal favourite and epitomised the appeal of this band. This song is a prime example of modern indie pop brilliance.
Rob the Rich are a band in their relative infancy: they still have a little way to go but they have the potential to be one of the biggest bands in the south and as it stands, are the newest gem in Brighton’s indie crown.