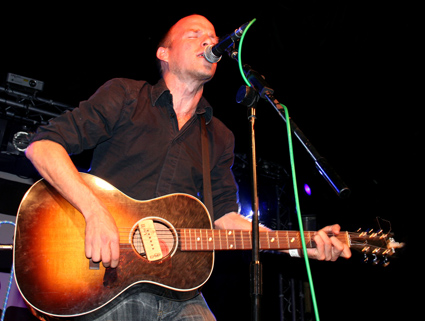 Concorde2 is – and has long been – something of a Brighton institution for live music, so a small two-day festival to celebrate its 21st birthday is an entirely appropriate tribute to the joys of alternative music. After all, what could be more fitting than squeezing four stages into the venue to showcase some of the cutest, quirkiest and most delightful indie acts on the scene? That’s right. Nothing.

Friday’s mini monsoon did little to dampen the mini festival’s opening day, with stand out performances from Wild Beasts and the rather wonderful Devon Sproule, whose gorgeous old southern country/folk/blues sound set the scene for a night of beautiful, lilting pop. Hot on her heels came a high-quality set from the dour acting but sprightly sounding headliners Camera Obscura. The Scots have rarely sounded better, delivering a string of glimmering pop moments, mostly culled from their most recent album ‘Let’s Get Out Of This Country’, while finding time to smuggle a few equally pleasing sounding new songs into the mix.

Some rather more clement weather heralded a busier Saturday night, where The Wave Pictures opened proceedings in the main bar with their unique brand of wittily worded indie folk. In the small backstage area, Slow Club delivered a stand out performance on a tiny stage, in front of a jam-packed crowd. The band, comprising of guitarist Charles and drummer Rebecca, delivered such a beautifully simple pop set – but pop filtered through a folky gauze and then dried in a rockabilly sunshine – that they left behind a room full of grins. Which left Brighton’s own Brakes to tear through their typically crazy mix of country/indie/rock. Cockahoop thrash-ups of ‘Jackson’, ‘Spring Chicken’ and ‘NY Pie’ had the crowd jumping around in fine style to remind everyone why Brakes are everyone’s favourite party band and bring things to a triumphant conclusion. Which, frankly, was all enough to leave everyone hoping for another 21 years.