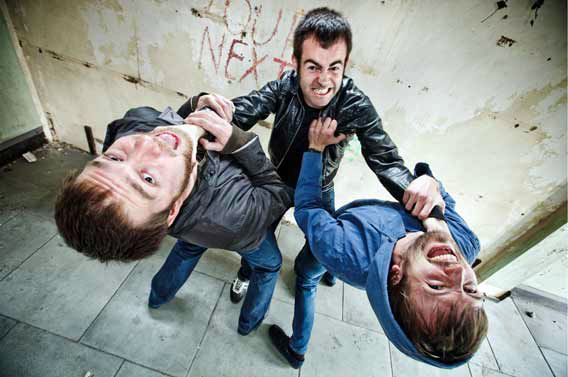 It would appear that the audience for punk, and indeed straight-up rock music as a whole is rapidly diminishing. True, the Freebutt does feel pretty rammed from my vantage point tonight, but on closer inspection this is largely due to the massive supporting column that has been handily plonked right in front of the stage, forcing the crowd into two equally crushed groups. There is still a fair amount of space at the back of the small venue, and with reports that Future Of The Left have been performing to crowds of 50 and 60 on the tour, the signs for the future of balls-to-the-wall rock are worrying.
This is a huge shame, as Future Of The Left seemed to have defied the odds and finally escaped the trappings of being two-thirds of legendary underground band Mclusky, by releasing one of the albums of the year with ‘Travels with Myself and Another’. It was a taut, focused album that perfectly fused lean, hardcore rock with a witty pop sensibility, and the reviews that followed suggested the band, and hardcore rock in general, may have been in line for more mainstream success.
Support act Tubelord manage to weave twitchy guitar lines and intricate drum patterns round some heavy, but fairly standard shouty choruses, and seem to have the whole quiet, quiet, quiet, LOUD! dynamic down to a tee. There is a bit of innovation in the more intricate musical passages, and the band seem very tight and together, but the lack of variety between songs coupled with the nagging feeling that all this had been done to death a good ten years ago didn’t really hep their cause.
Future Of The Left on the other hand, may not be overly original and have about as much subtlety as Katherine Hamnett’s wardrobe, but what they do, they do very well indeed. Opening with the savage ‘Arming Eritrea’, their ferocity is evident from the get-go. Lead singer Andy Falco’s hammering at his guitar, veins popping and eyes bulging as he screams ‘I’m an adult!’ into his mic like a tantrum-ing two year old in Tesco’s.
‘Stand By Your Manatee’, a song which seems chiefly concerned with the shame of eating with plastic cutlery, bounces along with a surprisingly jaunty riff, and maintains much of its harmonising charm in the live setting. Lyrically, it provides a glimpse of the band’s dry humour, which is further evidenced later, as the band relax into some genuinely hilarious back and forth with the eager audience.
Some tracks, notably ‘I Am Civil Service’ and ‘Land Of My Fathers’ are bereft of some of their on-record intricacies in favour of a blanket of screaming aggression which makes them sound a touch samey at points, but for the most part the live transition is near perfect. ‘I Am Civil Service’ and ‘The Hope That House Built’ showcase a perfect mix of violence, wit and pop-savy choruses, before closer ‘Cloak The Dagger’ ends proceedings in an ten-minute orgy of feedback, audience participation, screaming and general mayhem that sends everyone home happy.
Words by Daniel Pearson
futureoftheleft.com 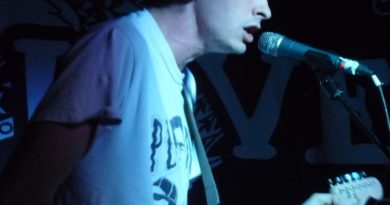 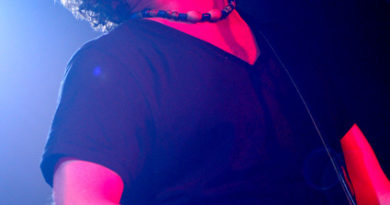