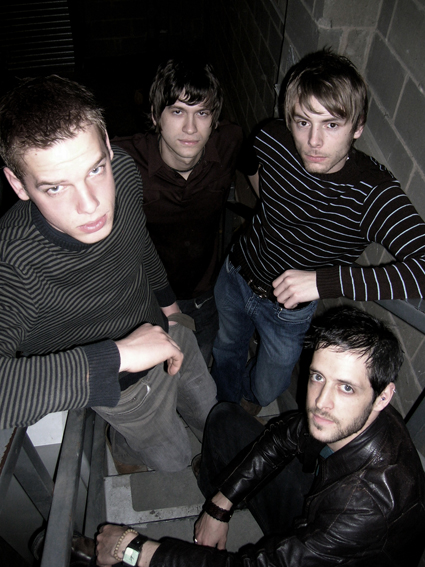 XYZ: How old is Sandweaver and how did you all meet?
Matt: The band formed in the summer of 2003. I was busking around the local open mic nights of Worthing and through a friend of a friend of a friend met John Hickling (drums), who said he knew a couple of quality chaps up for banging their musical heads together. Johnny Stubbs (lead) and John both studied at B.I.M.M (The Brighton Institute Of Modern Music) and with the addition of original bass player John Mc Clallahan, the three Johns and Matt formed Sandweaver. Having three Johns in one band was way too confusing when trying to grab anyone’s attention at practice and all was made a lot easier when Tom Pople replaced John Number 3 on bass in 2005 to complete the current Sandweaver happy family.

What’s cool about Worthing?
Hmm. Well it’s home town to three of us and although the music scene is plenty over-shadowed by Brighton it’s always great to play your hometown. Hopefully what we’re doing along with many other emerging bands will show that Worthing does have some great live music kicking about. We also now host the Birdman Competition which we nicked from Bognor because their pier is knackered.

What’s not?
The lack of live music venues. Worthing needs to jump on that one!

Your debut album came out in March in independent outlets – how has it been received so far?
Really well! After the launch party we had no idea how our new disc would shift. We’ve had a lot of support from some great independent record shops which has been really good for us. It’s really nice to hear people are liking the tunes and it’s crazy how simply through the wonders of sites like Myspace and iTunes people are buying it from as far away as America.

What inspired you when you wrote this album?
We have gone through stacks and stacks of material over the time together and we really wanted to select and write the tracks that really reflected how we now wanted to go forward as a band. The album has an obvious galactic space theme and this just kind of grew from experimenting with the track ‘Jupiter Girl’. This track saw our sound shift from a bunch of guys just simply playing well together to a group that now collectively song-write.

This album is called ‘Invasion’ – are you invading or do you feel invaded?
When you put it like that we can’t answer without cracking a few cheeky smiles. Let’s just say the album could have sounded a little dodgier with the title ‘Invaded’.

What makes you unique?
Un-boxable…hey, the new word of the day. The combination of the songs, the vocal sound and guitars (which constantly gets reviewed as having an ‘80s retro feel) and an open mind to experimenting gives us a sound that sits somewhere slightly off centre of the current indie scene and is always hard to pigeonhole.

You made it to the Grand Final of the program Live & Unsigned – can you tell us about this experience so far?
It’s been good fun from the start and we’re really pleased we’ve made it to the final 12 acts out of 10,000. As we progressed through each round the level of competition really jumped up a few notches – to win the national final will be a tough challenge but one we’re really looking forward to.

What would you be doing right now if you were not answering my questions?
Tom would be in the bath eating a pizza, John would be driving a tractor, Johnny would be having a nightmare parking and Matt would be dancing the reverse cowboy.