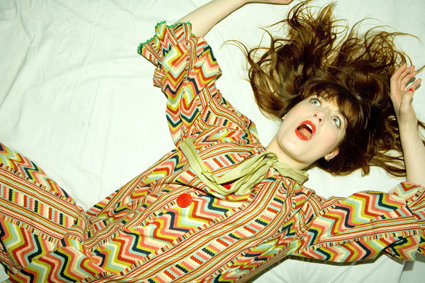 Going with the Flo: Florence is taking over…

As the underground buzz finally begins to filter through to the mainstream, and with a Steve Lamacq interview and ID Magazine feature already under her belt, it seems Florence Welch has the world at her feet. Jody White decided to spend some quality time with pop’s hottest songstress.

In person, the 21-year-old is a beguiling young lady, all red hair and bright eyes. She buzzes with life as we talk, immediately friendly and generous, even while nursing a sizeable record-deal induced hangover.

“The first band I was in was called the Toxic Cockroaches, we were really into punk, but the only bit of instrument we had was a drum. It didn’t really work out.” Fast forward through messy punk nights, chance meetings and initial musical forays (an early recording was delightfully entitled “Someone Spilled Snakebite on the Espadrilles”), and Florence has had one hell of a year.

An appearance at South by Southwest in the spring made waves with industry types, and was followed by appearances on the summer festival circuit. Now undertaking her first headline UK tour, she also squeezed in just enough time to sign her first major record deal with Island.

So, feeling good? “I’m fucking ecstatic. It doesn’t matter who you sign with as long as you make the album you wanted to make in the first place. I’m just excited I’m going to finally get to make it. It’s all written, it’s just a question of recording it. It should be out next spring.”

It’s not wild conjecture to expect the album to contain the majority of her live set, which includes such wonderfully titled tracks as “My Boy Builds Coffins” and “Girl With One Eye”. How does her creative process work? “I kind of see pictures in my head. You can visualise an idea. Then it’s about getting those pictures out to the world, letting your imagination take form… writing and singing seems like the best way. Songs come from seeing things, and then my imagination puts a weird twist on them. It’s basically a way of understanding how I feel.”

Excited, I actually ask about her lyrics (“No-one ever asks about my fucking lyrics!”), and I’m privy to the story behind the aforementioned “My Boy Builds Coffins”: “My boyfriend at the time was making an album himself, he was in a band, and I was like ‘I love you!’, following him round. One day he couldn’t take me to the cinema because he was building a coffin for his album cover! A lot of my songs are about wanting to exorcise something, but not wanting to be so literal about it.”

Growing up in Camberwell, South London clearly had a sizeable impact on her: “I went to Camberwell Arts College for a year, there’s a very punky, scallywag scene in South London. I ended up at a lot of house parties, you know, in a cardboard box, in the attic, covered in fake snow. So I think it probably has affected me!”

There’s a palpable glint of mischief in her eye as talk turns to inspiration. Florence is obviously a lover of the small things in life, the magical everyday moments that some might label mundane but that the more perceptive among us pick up on and commit to memory as examples of life being lived, emotion exposed: “I was sitting having a cup of tea in a cafe and I saw this really fat little girl. She was just chasing this little boy round and round a bollard, shouting: ‘I LOVE YOU! COME BACK, I LOVE YOU!’ for about half an hour, and the little boy was just running away.” [much laughter]. “That was pretty inspiring.”

A little closer to home, Brighton holds some interesting memories: “I did one of my drunkest shows here, it was one of my first shows and I was wasted. I was throwing drinks off the stage and had a screaming row with the guy who played guitar for me, then ended up at a house party at six in the morning sitting on a swing.”

The lucky few who saw her close her Bestival set with a truly revelatory version of Candi Staton’s “You Got The Love” (out now as the b-side to her new single “Dog Days”) could see it instantly. Looks were exchanged, mouths hung agape, impressed words were heard coming from every direction. Even Flo herself was slightly overwhelmed: “I was like, ‘this is the best moment of my life, nothing is going to top this, not the birth of my first child, not winning an Oscar, nothing’!”

That evening we experienced what many more are just beginning to discover, that this young girl is really rather special. XYZ wholeheartedly recommends keeping a close eye on her (and the Machine). It’s plainly evident that the future looks radiant; a star is in the ascendant.