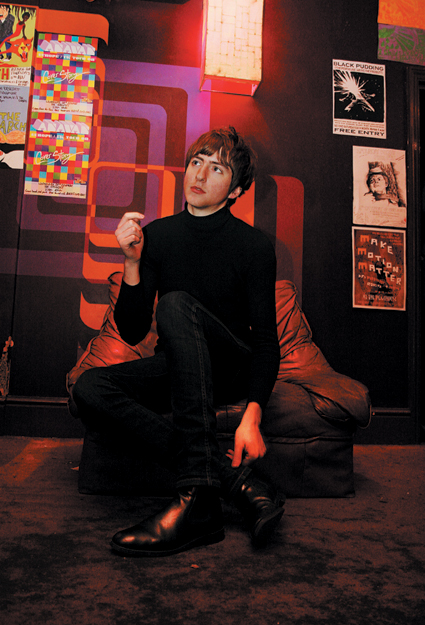 Eugene McGuinness burst onto the singer-songwriter scene with last year’s ‘Early Learnings’ EP, which showcased his joyous brand of witty, tuneful, inventiveness. With a self-titled debut album just out, Joe Owen grabbed a word with the mischievous crown prince of indie pop.
Sitting upstairs in the Freebutt with Eugene McGuinness, it’s noticeable that he’s been doing some growing up in the last year. In skinny jeans, shoes and a turtleneck jumper, topped off with an Alex Turner haircut, he looks like he’s wandered out of a 1966 Beatles photo shoot. While the support bands sound check underneath us, he discusses the new album and how its creation differed from his first EP:
“I suppose I knew I’d be writing with a band in mind – certainly with other musicians – because first time round it was all just me blagging it. I feel like the writing’s progressed and got better but I haven’t really changed anything in terms of how I do it.” T
hat song writing has been getting McGuinness rave reviews, the new album showcasing not only his great pop sensibilities but the same wryly humorous lyrics that led Domino to sign him up. Perhaps those storytelling skills come from his Irish background? “You’re one of the first people to say that. A lot of people say it’s very London or Merseybeat. If anything I identify with that storytelling thing. I adore Irish music and I always identify with that London/Irish-y thing of the Pogues. Some of those (Shane MacGowan) lyrics are the best ever written. He’s definitely one of my big influences.”
Eugene decided to move away from London to study at Liverpool’s Institute of Performing Arts and his love for the city emerges in the technicoloured tales of “Bold Street” and “Myrtle Parade”. It also turns out that he actually won Liverpool the European Cup in 2005. Well, maybe: “I’m a big football fan,” he confirms, “and I love Liverpool the city, but to be honest I’m more of a Spurs fan. But I was really glad when they won the European Cup. I was in this pub full of red shirts in my leather jacket and hair – I was blatantly the only student. We were wedged in by all these red shirts and Liverpool were 3-0 down. We were like: ‘let’s get out of here.’ But some guy said, ‘Stay here. Seriously, stay here it’ll get better and we’ll win, we’ll buy you a pint – you’re our good luck charm.’ So I stayed and had a pint of Guinness. Next thing I know: goals flying in everywhere!!”
Rapier sharp with a phrase, McGuinness is responsible for such lyrical flourishes as “fanfuckingtabulous” and “I’m a fucked up bastard and a sub-zero psycho”. He may look innocent, but it’s his subversively dark wit and silver tongue that make him such a pleasure. His album cover is a case in point, finding him looking vaguely angelic but dressed in fencing gear. “It was kind of my idea,” he confesses, “I was having a drink with a mate of mine. We were joking about all these ideas, me on horseback with a sword, me dressed like a ninja warrior… the thing is these conversations happen and I’m like “Yeah, wicked let’s do it!” and he gets all excited and then the next day I’m like: “I’m not f-cking doing that!”
The singer’s wide-ranging creativity is also manifesting itself in his latest project, a children’s film, of all things. At the mention of it, he gets visibly excited. “How’d you find out about that! It’s an animation thing – a little bit Watership Down, a bit dark, but it’s for kids. Dylan, who directed the ‘Monsters Under The Bed’ video helped me with the animation and I had this idea, story and characters. Putting that actually together and going up to film guys though…that hasn’t been done yet, but it’s gonna happen sooner or later, because I’m really attached to the characters.”
With such an inherent ability to pen a catchy ditty, you suspect artists like McGuinness might get frustrated at the lack of mainstream radio airplay. The singer seems untroubled though: “There are times I think ‘God, I wish everyone could hear it, or get the opportunity’. But usually that involves you having to do something quite shit. Radio 1 daytime playlists do play some stuff during the day by people whose characters have come through unscathed – Arctic Monkeys for example. I think if I record a really good record and a decent label puts it out that’ll be enough, but it isn’t enough. The major label thing is beginning to mean a bit less though. Bands that have become massive and will become massive in the future are usually ones that have sold out venues and captured people’s imagination long before any industry or anything tapped in.”
Let’s hope the same goes for Eugene, because there’s no doubt that this McGuinness is good for you.