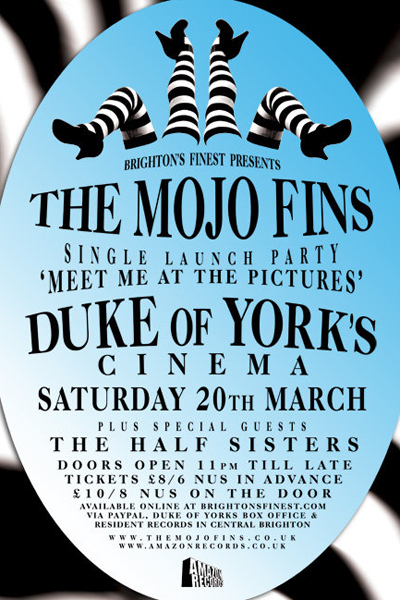 Following wide critical acclaim for their first single ‘Piñata Face’ in 2007, The Mojo Fins – one of Brighton’s finest pop-rock bands – celebrate the launch of new single ‘Meet Me At The Pictures’ this weekend with a performance at Duke Of Yorks picture house.
This single precedes the release of album The Sound That I Still Hear which is out on April 6 on independent label Amazon Records. This body of work has been composed with painstaking care and attention to detail; coruscating guitars, intricate rhythms and driving bass bound together by the unifying force of melody.
With support from The Half Sisters, and a special viewing of the BBC short film ‘Conversation Piece’ directed by Joe Tunmer.
Saturday 20 March 2010
Doors: 11pm
Tickets: £8/ £6 NUS in advance from Duke of Yorks Box Office and Resident Records, £10/ £8 NUS on the door.
@ Duke Of Yorks
myspace.com/themojofins

Bad For Lazarus On Tour

28th October 2009
Subscribe
Connect with
Connect with
0 Comments
Inline Feedbacks
View all comments
SEE XYZ IT'S ON! Click for more