It’s one of our very FAVE festivals on the south coast, they’re super passionate about brilliant new music, and they’ve just announced the first wave of acts for 2016! It’s Southsea Festival! One day, one city, over 20 venues and 100+ artists!!
This year is an incredible line-up, promising memorable shows from the likes of Mystery Jets, Lucy Rose, Little Comets, The Big Moon, Black Honey, Eagulls, Tellison and over 20 other acts now already confirmed to appear across 20 venues – including for the first time ever – the Pyramids venue! And there’s more to be announced!
Their mega high star rating on FB from nearly 100 people who’ve voted, says everything about the quality of this brilliant little day festival, for us it’s an absolute must-go on the calendar for lovers of new music! And generally, if you’re into great music or love a good gig on the south coast, and you’re not buying tickets to this festy, it’s only because you’re already going ’cause you’re performing at it!
Tickets will be priced at just £20 +bf (£21.60) so bag yours as soon as you can online here
This is an 18+ festival.
Check out the official website at www.southseafest.com for full info and announcements as they come.
Follow the event at facebook.com/southseafest
All aboard! 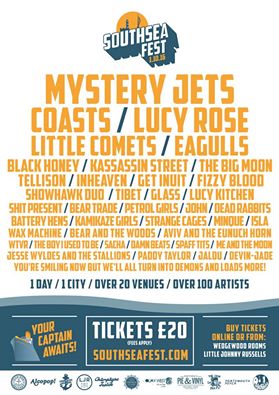