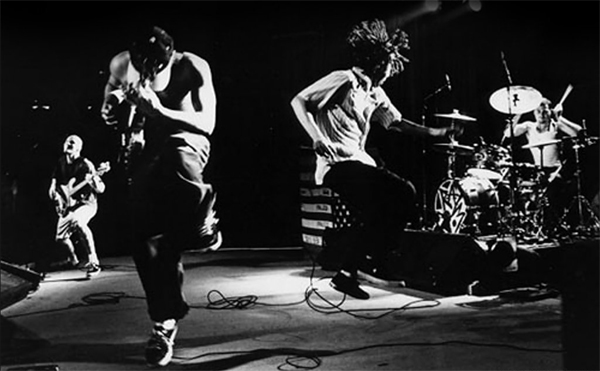 Since Thursday 3rd December, a massive 870,000 music fans have joined a campaign to block this year’s X Factor winner from clinching the Christmas number one.

For the last four years, the coveted festive top spot has been dominated by the winners of the Cowell-created karaoke reality show. The campaign’s creators, Jon Morter and wife Tracy, are suggesting fans buy the anti-authority anthem ‘Killing In The Name Of’ by Rage Against The Machine, on December 13 instead of the winner’s song. Last year, Jon unsuccessfully tried to get Rick Astley’s ‘Never Gonna Give You Up’ to the top spot instead of Alexandra Burke’s cover of ‘Hallelujah’.

A live performance of Rage Against The Machine’s ‘Killing In The Name’ was aired on Radio 5live Breakfast shortly before 9am yesterday morning (Thursday18th).  The guys had chatted on the show about the UK Christmas Number One campaign, and then were invited to perform the hit live on air.

But minutes into the performance, lead singer Zach de la Rocha could be heard repeatedly screaming “Fuck you, I won’t do what you tell me”. The song was eventually interrupted by desperate host Shelagh Fogarty shouting “Get rid of it”. She then explained: “Sorry. We needed to get rid of that because it suddenly turned into something we weren’t expecting – well, we were expecting it, and had asked them not to do it, but they did it anyway, so buy Joe’s record.”

Buy your copy of ‘Killing In The Name Of’ from Play.com for 65p (click here), or from Itunes for 99p (click here). Tom Morello (guitarist from Rage Against The Machine) has announced that he will donate his earnings to Youth Music, a scheme helping young musicians in the UK.

Join the Facebook group to show your support:
facebook.com/group.php?gid=2228594104
ratm.com