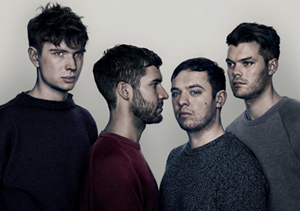 Manchester Art  pop band Everything Everything take their music back on tour, and will be visiting Brighton this month to support the release of Kemosabe –  the latest single from their new Album Arc.
They were nominated for the BBC Sound of 2010, and then for a Mercury Prize for their debut album Man Alive.  Their last single Cough Cough, (which hit the charts at #37  and gained much support on the airwaves) was released last year, and Kemosabe is their latest single from the Album Arc – released earlier this year.
myspace.com/everythingeverythinguk
everything-everything.co.uk
Everything Everything play Concorde2 February 7th 2013. Doors: 19.30 to 23.00 14+ / £14.00 in adv + bf

Want to win tickets to their Concorde2 show February 7 which has now SOLD OUT?
Simply answer this question on an email to everythingeverything@xyzbrighton.com:
What’s the CODE-WORD on the event listing at the XYZ Magazine event guide website.
Include your name, age and mobile so we can contact you.

All competitions are subject to XYZ’s competition terms
Sharing's Caring: