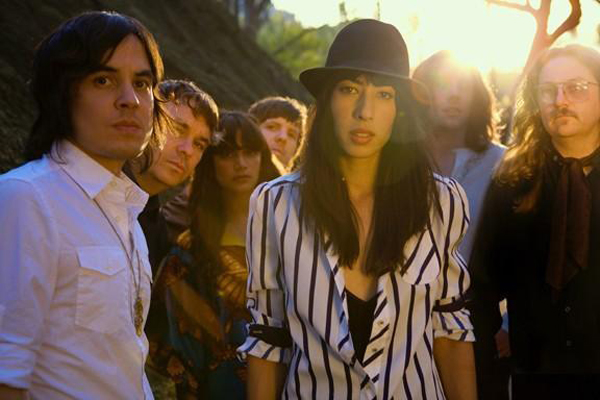 The Phenomenal Handclap Band is a tight-knit aggregation of musicians and artists from Lower Manhattan and Brooklyn. At the center of it is Daniel Collás and Sean Marquand who, joined by their supremely talented friends Patrick Wood, Nicholas Movshon, Luke O’Malley, Laura Marin, Bing Ji Ling, Pier Pappalardo and Joan Tick.
The collective started when Collás and Marquand, two New York underground club DJs, became restless with the concept of playing other people’s music. Both had also been involved in the thriving nightlife scene, and had an almost encyclopedic knowledge of esoteric music so becoming producers seemed to be the next logical step. After working with a wide range of artists, the duo set their sights on The Phenomenal Handclap Band. The result: a self-titled debut album which boasts guest appearances from Jon Spencer, Bart Davenport and Lady Tigra – to name a few, is equal parts anthemic, dancefloor-oriented and orchestral, borrowing elements from progressive rock, disco, electro, and psychedelia.
Live, The Phenomenal Handclap Band is distilled to an eight-member powerhouse, an eye-popping spectacle that overwhelms the senses. It pulses with a savage rhythm section that provides the ultimate foil for cascading guitars and electrified washes of organ and synthesizers. Their delirious sermonizing whips crowds into a charismatic frenzy. Needless to say, their live shows are more akin to a spiritual church revival than an actual rock show. With support from Maxxi Sound System DJs
Friday 12 March 2010
Doors: 10pm – 3am
Tickets: available at Rounder, Resident and wegottickets
@ Coalition
myspace.com/phenomenalhandclap