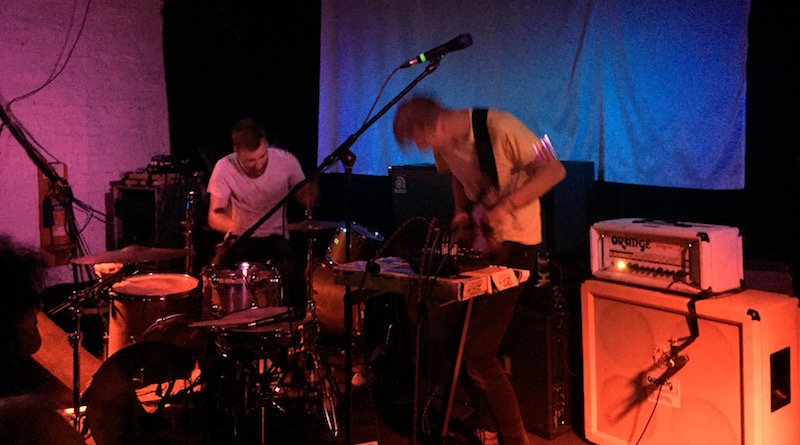 Back amongst it for the second day of The Great Escape Festival, and plenty more great acts to rush around town for, as well as some long overdue sunshine!
Down at Coalition for Hey Charlie, a British grunge-pop band with an undeniably American sound in the same vein as Colleen Green or Bleached. They come across gimmicky at first with their cheerleader outfits, but the simplicity and catchiness of their songs make it easy for everyone to get involved and sing along.
Next up is LA Jungle at The Green Door Store who absolutely blow everyone away, this duo are by far the most interesting band we’ve seen so far. They use drums, guitar, vocals, keyboards and countless effects pedals to create repetitive Kraut-rock inspired loops that layer up gradually and build in to chaos. At times they sound like a furious hardcore band (check out “Technically You are Dead”) and at other times they sounds like crazy gabba techno. Mental!
Over to Queens Hotel next to see Molly; a shoegaze duo from the Austrian Alps, they deliver a trippy performance that only really hits with full impact during their final song, but when it does it’s worth the wait. This one was worth seeing just to witness their drummer not only drum, but play keyboards as the same time. A few technical difficulties affect the performance but their musicianship shines through.
Finally, Zeal and Ardor at the Brighthelm Centre. The venue’s running at full capacity which only adds to the anticipation building in the room for their unusual blend of African American spiritualist music, blues, and black metal. Yes; there really isn’t anything else like this! They take to the stage in darkness wearing ominous hoods before kicking things off with a blinding light show to match. With seven people on stage, it is quite a spectacle and the contrast of genres has everyone guessing what to expect next.
Follow us at Twitter.com/xyz_magazine and Facebook.com/xyzmagazine.

24th August 2009
Subscribe
Connect with
Connect with
0 Comments
Inline Feedbacks
View all comments
SEE XYZ IT'S ON! Click for more