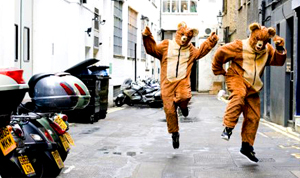 Joe Goddard and Raf Daddy bring their feelgood vibes to Coaltion alongside experimentalist dance-popsters AlunaGeorge.
Goddard, of Hot Chip fame, teamed up with fellow bear Raf Rundell in 2009 and since then they’ve carved a path to dance-infused pop music parallel to Hot Chip’s, by way of classic house, 2-step and soul. The resultant sound focuses on each of those genre’s capacities for ‘good times’, the pair insistent on sharing their love of clubbing culture for its most innocent traits (see ‘Bear Hug’: “I ain’t here to chirp or try and lift your skirt, let’s have a bear hug”). They get away with it too, given the bolstering hooks you’d expect from a Goddard production. The same ear for melody and getting everyone in the ‘club lovey’ translates to their DJ sets, thanks to the breadth of crate you’d expect from such a diversely influenced pair.
Sharing the bill are Aluna and George, with their blend of bubblegum r&b and warp-esque electronica respectively. Unashamedly poppy vocals trace out polished hooks amongst a maelstrom of glitchy sonics – audibly owing as much to Flying Lotus as The Knife. Playing live, they will undoubtedly provide a refreshing precursor to a night that will be as devoid of pretension as it is chock full of feelgood bangers.
£12.50adv + BF, 23:00-03:00
For more information visit www.tinyurl.com/2bearscoalition