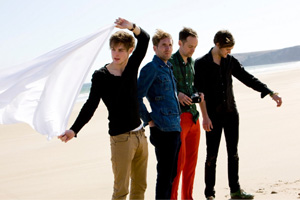 Oxford’s finest in nautical-themed folk-rock bring a barrel of new material to Concorde2, covering as yet uncharted sonic territory. Avast, ye!
Although Stornoway’s members (including two pairs of brothers) stem from Britain and South Africa, their heart lies completely in the landlocked, genteel landscape of Oxford, where they met at University and made and secured their success. Naming themselves Stornoway, an isolated Scottish isle, is typical of their far-reaching sound and yearning imagery, where swashbuckling, textured arrangements and themes of gulls, ravaged coasts and vast oceans abound. This rarely extended beyond a sort of novel whimsy on their breakthrough debut Beachcomber’s Windowsill in 2010, until this month’s follow-up Tales From Terra Firma saw them upscale on that battered navigational map. The affectingly skillful mastery of melody and precisely interweaving arrangements that saw wide praise for their debut remain on the new album, now bolstered by an unexpected adoption of a grand variety of textures gesturing towards stadium indie. Think Maccabees production, only with more Turkish strings, field recording textures.
Live, this means a whole new experience. Band members saw wood and rustle crisp packets rhythmically in some numbers, thanks to the increasing creative involvement of lead singer Brian Briggs’ brother Adam. And Briggs himself seems to have discovered a bank of effects pedals somewhere in the garage where they recorded the new record. The last thing anyone expected was Stornoway to go for post-rock delays and jittery loops, but that’s exactly what you’ll find in the band’s rapidly expanding sound. Interspersed with regular acoustic intervals, their live set provides on all fronts, as new, grander, propulsive numbers give way to songs on upright bass and brushes, and bare moments with Briggs alone with his guitar. These last moments provide much of what made people fall in love with the Oxford band in the first place, baring the wavering, tuneful melancholy and evocative lyrics that hold the whole thing together.
Whether you come committed to the band’s new direction or simply to sway along to 2009’s hit single ‘Zorbing’, you’ll find a wealth of direct, affecting melody to warm the iciest, most storm-ravaged hearts.
Stornoway will be playing Concorde 2 on Wednesday March 20
19:30, £13 adv + BF, 14+
See Concorde2.co.uk for more information